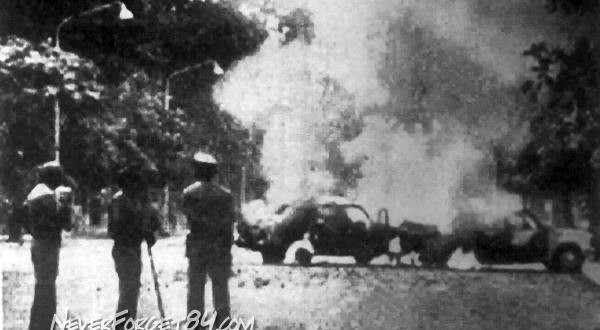 1984 Anti-Sikh Genocide – The silence of the police station diaries.

Comments Off on 1984 Anti-Sikh Genocide – The silence of the police station diaries. 516 Views

New Delhi: The focus is now on how Congress leader Sajjan Kumar was acquitted in a major anti-Sikh Genocide case where he was accused of inciting a mob that led to violence.

A key factor in his acquittal was the testimony of a police constable from the local station who contradicted witnesses, saying Sajjan never visited that area.

But serious questions have been raised on the testimony of the constable, given that the station records of the police station to which the constable belonged, is absolutely silent on the mayhem that was raging.

Between 1st and 2nd November 1984, on the worst days of violence, three independent witnesses from Raj Nagar in Delhi Cantonment area, who saw their family members being murdered, claimed to have seen Sajjan Kumar make inflammatory speeches.

One of them was Jagsher Singh, who was 17 years old at that time. He claims to have seen Sajjan Kumar, then the Congress MP from outer Delhi, pull up on his car on the night of 1 November, and tell his supporters why they haven’t followed his instructions to kill more Sikhs.

These statements became the basis of a CBI chargesheet against Sajjan, which the agency claimed, was their strongest case in the 1984 Genocide.

And yet, in a verdict that sparked anger, the court chose to acquit Sajjan Kumar in this case last year, finding the testimonies unreliable.

Instead, the court relied on statements made by police constable from the Delhi Cantonment police station, Chajju Ram, that he never saw Sajjan Kumar visit the area.

This is the same constable who goes on to say in his statement that “when I was on patrolling duty I did not notice any burnt house, or dead body.”

A shocking claim given that 340 people were killed in just three days in the area under Delhi Cantonment police station. Over 3000 Sikhs were murdered in Delhi alone during the massacre.

The station diaries of Delhi Cantonment police station of November 1 and 2, accessed by Indian news network NDTV, only corroborate the chilling police silence.

Right through the day, the entries log no unusual activity. At the end of every day, it says “all clear, nothing untoward to report.”

Shockingly, one of the few entries about rioting targets the Sikhs, saying in Palam Colony,
Sikhs have “gathered and are rioting.”

DP Singh, lawyer for the CBI states that this clearly shows the lack of credibility of the police testimonies, and that the police were acting at the behest of their political masters.

Sajjan Kumar’s acquittal in the Delhi Cantonment case has been challenged in the High Court by the CBI.

But those who claim to have seen him incite mobs have little faith they will see justice.