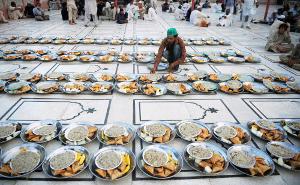 Dubai: Around 150 Sikhs attended an Iftar feast at a mosque in Dubai, joining Muslims in breaking their fast during the month of Ramadan in the Gulf country (United Arab Emirates).

“The purpose of organising the Iftar was to reach out to people from different faiths and help them learn more about the holy month of Ramadan,” said Ahmed Hashim, one of the organisers of the Iftar gettogether.

Sikhs from Guru Nanak Darbar, a gurdwara in Dubai, were invited to visit the Al Manar Islamic Centre on Friday to attend the Iftar party, Khaleej Times reported.

“Most people who came for the get-together went back with fewer misunderstandings. We plan to visit gurdwaras, temples and churches and we have also been given a chance by church committees to speak after the weekly Mass,” Ahmed said.

“It was a unique experience for me and it was a great learning experience. Having a dialogue and knowing the goodness in every human being is the biggest benefit of such inter-faith dialogues,” said Surender Singh Kandhari, one of the Sikhs who attended the party.

Muslims wake up early morning for the pre-dawn ‘sehri’ meal, renouncing food and water during the day before breaking their fasts in the evening. The monthlong fasting culminates in the Id-ul-Fitr celebrations.

Previous: State govt doubles aid to Op Bluestar deserters
Next: SGPC for creating awareness about Sikh symbols in US