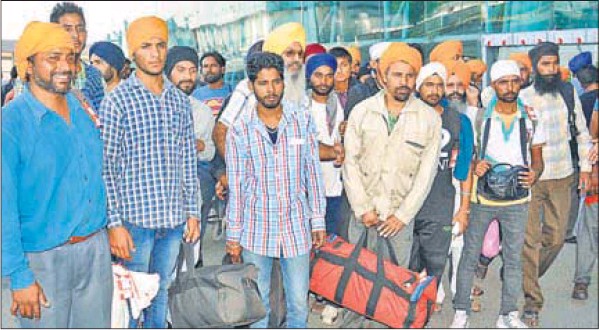 Amritsar, Punjab: Leaving behind the devastating floods that claimed over 200 lives and uprooted many families in Jammu and Kashmir, as many as 125 tourists stuck in the flood landed at Sree Guru Ram Dass Jee International Airport here on Saturday afternoon.

Of the 125 tourists, 47 were brought back by the Shiromani Gurudwara Parbandhak committee (SGPC).

The tourists came back with horror stories to narrate, while their arrival at the airport saw outburst of emotions as soon as they meet their kin.

One of the tourists, Deepak Chawla, a local resident, said: “I went to Srinagar with my family on a holiday on September 4 and was scheduled to return on September 8, but I was left with no choice, as thousands of people were stuck in the flood.”

Hailing the role played by army personnel, Chawla, 58, a local businessman, said: “The army personnel have done a commendable job and have evacuated endless number of people to safe destinations. The kind of damage J&K has seen was unprecedented, and it was the army that rescued people. Many locals are still stranded.”

Another city resident Bhupinder Singh, who was airlifted by the Shiromani Gurdwara Parbandhak Committee (SGPC), said, “I went there to work as a carpenter, but the calamity forced me to return home.” As many as 100 tourists were airlifted from Srinagar to Amritsar on Friday, of them 30 were brought back by the SGPC.