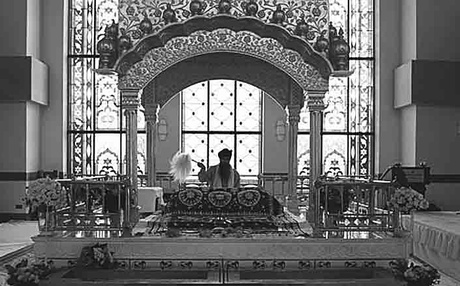 Comments Off on Youth-centric manifestos for Gurdwara polls 507 Views

The committee that directly manages several historic Sikh temples and scores of colleges, schools, hospitals here is the second richest Sikh body in the world, with an annual budget of over `125 crore.

The result of the January 27 election not only impacts the politics of Delhi, which is going to polls in six months, but also the neighbouring Punjab. Led by Punjab Chief Minister Parkash Singh Badal, his son and deputy CM Sukhbir Singh Badal and cabinet colleagues, Shiromani Akali Dal MLAs have been camping here for over a week to get their party men elected in the 46 seats.

Though the SAD managed to get only six seats last time, it hopes to increase the tally this time. At the other end is the incumbent and Badal’s protégé, Paramjit Singh Sarna, who is now supported by the Congress. Badals often blast Sarna’s ties with the party over the 1984 anti-Sikh riots, which remains another poll issue. In a first, a sitting Congress MLA, Tarwinder Singh Marwah, is also contesting the polls.

Sikhs constitute nearly 7 per cent of the capital’s 1.6 crore population. Yet only 4 lakh members of the community — those who don’t smoke, drink, and trim their beards or hair — are eligible to vote.

While Sarna says the upgrades and maintenance work done in gurdwaras are his USP, his rivals allege corruption in the SGMC affairs.

“We will bring transparency and reforms in the gurdwara management. There will be e-tendering of projects while the accounts will be put online,” Sukhbir said while releasing the manifesto which promises tablets and smart cards. It also promises five civil service academies to provide free training to Sikh students.