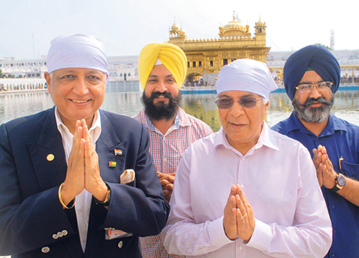 Comments Off on Will pursue case of Gujarat’s Sikh farmers: NCM chief 276 Views

Amritsar, Punjab: Accepting a memorandum by the SGPC on various issues concerning the Sikhs, National Commission for Minorities (NCM) Chairman Wajahat Habibullah today said the panel was looking into the issue of eviction of Sikh farmers from Gujarat.

Addressing mediapersons after paying obeisance at the Golden Temple, Habibullah said the commission had sought replies from the Punjab and Gujarat Governments over the issue.

“The Punjab Government has told us that it is prepared to bear the expenses of the legal battle… If the Gujarat Government withdraws its plea from the Supreme Court and accepts the verdict of the High Court, the matter will be resolved.”

He said the commission was yet to receive a reply from the Gujarat Government. “We will pursue the matter to its logical end,” he said.

Following complaints from Sikhs in France on the turban issue, the commission had taken up the matter with the Ministry of External Affairs. Union Foreign Minister Salman Khurshid had even raised the issue with the French President during the latter’s visit to India, he said.

On the Devinderpal Singh Bhullar case, he said: “We will see what we can do in this regard as per the law.” SGPC president Avtar Singh Makkar, who felicitated Habibullah, also spoke of Delhi University’s “anti-Punjabi” move. The NCM Chairman assured all possible help in this regard.

On the Hondh-Chillar case, he said the Haryana Government had told the commission that a panel had been already set up to look into the matter.