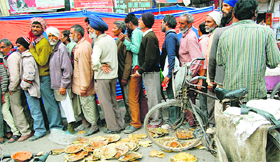 Amritsar, Punjab: The death of a devotee, Amarjit Singh of Jabalpur (MP), after consuming langar near Gurdwara Baba Atal Rai here on Diwali has brought to the fore the SGPC’s failure to have a mechanism in place to keep a check on the food being served near gurdwaras.

A number of stalls are put up near historic gurdwaras or on approach roads, serving langar to thousands of devotees thronging the holy city on auspicious occasions. But neither the SGPC nor the local administration cares to monitor these stalls.

The SGPC seems to have woken up to the issue and has ordered an inquiry into the incident, besides deciding to monitor langars and chhabeels set up around the Golden Temple complex on various occasions.

The SGPC has directed assistant secretary Sukhdev Singh Bhurakohna to probe the incident. SGPC chief Avtar Singh Makkar said it was a serious incident and appeared to be a conspiracy as others who also partook of langar from the same spot were fine. He said once the probe was over they would initiate a legal action.

No private organisation seeks permission from the MC authorities before holding langar, which is a violation of the norms. Admitting to this, Deputy Commissioner Ravi Bhagat said he would direct the authorities to implement the norm and ensure that a medical team was sent for sampling as well.

Meanwhile, the police is investigating the matter and the officials say the exact reason behind Amarjit Singh’s death will be ascertained only after receiving his viscera examination report.

As per the law, it is mandatory for all langar committees to get themselves registered under the Food Safety and Standard Act, 2006. The Act has become operational in the state with effect from August 8, 2011.

Dr Shivkaran Singh Kahlon, District Health Officer, said: “The deadline for getting registered under the Act has been extended to February 2014. We will approach all religious and social organisations organising langars to get themselves registered.”

He said: “We had sent our team to collect the samples yesterday after the incident was reported. But by the time the team reached there, the organisers had left the spot”.