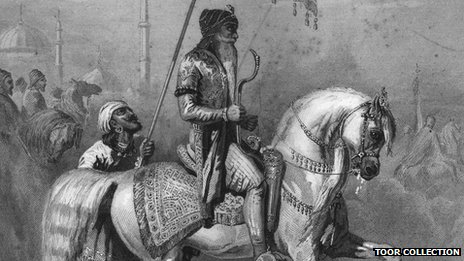 Punjab: Going back more than five centuries, Sikhism is a religion founded on peace, but forged by self-defence, resilience and defiance.

Sikhs might be well known for their warrior culture, but how did a peaceful community gain their martial reputation?

Two British Sikh authors, from London, have spent decades researching the story behind the rise of the Sikh martial tradition.

Now their work detailing the origins of the religion has become the subject of a new book, unveiled at the National Army Museum in central London.

The book, Warrior Saints: Four Centuries of Sikh Military History, explores the people, events and ideas that gave rise to a warrior culture, through 90 rare historical images and contemporary testimonies from archives around the world.

Co-author Parmjit Singh, of Southall, said: “For the past 20 years, we have been on a wonderful journey of discovery to reveal this hidden history.

”The reputation of the Sikhs as warriors is well known throughout the world. However, how they gained that reputation has never been fully told or appreciated.

“Indeed, the details have always been sketchy, even to Sikhs themselves.”

They explore the martyrdoms and conflicts that gave rise to a culture steeped in the teachings of Guru Nanak, the first of the 10 Sikh Gurus.

“The images in the book offer a fairly complete and unprecedented window into Sikh history, in a way never captured before,” said Mr Singh.

”It is a tale of enormous fortitude and resolve that rivals any military history through the ages,” he added.

One of the images in the book shows what is thought to be the only contemporary portrait of the Sixth Guru, Hargobind.

He raised the first Sikh standing army after his father, the fifth guru, was executed.

Guru Hargobind started to militarise Sikhs so that they would be able to resist any oppression.

“It’s a stunning portrait of the first real warrior amongst the ten gurus,” said Mr Singh.

“It’s a remarkable find for us to have a portrait that is believed to be from his actual lifetime.”

The authors said they wanted to remind modern generations of Sikhs about the struggles and history of their ancestors, which they believe has been forgotten by many.

Co-author Amandeep Madra, of Hillingdon, said: “People think of the Sikh warrior tradition as coming into being with the founding of the Khalsa in 1699 by the 20th Guru, Gobind Singh.

“In fact, its roots lie in the teachings of Guru Nanak in the 1500s and in the struggles of the Sikhs for survival from the early 1600s.”

Many Sikhs in the capital have welcomed the long-awaited book.

The director of the City Sikhs Network, Jasvir Singh, said it gave context to the Sikh community today and how it developed from the Gurus to the modern day.

“It’s very accessible to be able to make a connection between Sikh history and present day Sikhs through the images.

“It’s different to other books because it’s engaging and really highlights what the Sikh community was like then and how has it evolved.

“It is a wonderful way to restore and preserve our history for generations to come.”

1. Sikhism originated in the Punjab area of modern-day India and Pakistan in the year 1500, making it one of the world’s newest religions
2. The movement was started as a counter-point to Hinduism and Islam by Guru Nanak, who travelled villages teaching his new faith, founded on peacefulness
3. Over time, Sikhs became more and more militarised to defend themselves. After the Moghal emperor Aurangzeb forced people to follow Islam in the late 17th century, the tenth guru recreated Sikhs as an elite military group
Over the next century, Sikhs rose up time and time again under military leaders, taking more and more territory
4. While Sikhs are not militarised nowadays, baptised Sikhs are allowed to carry ceremonial swords

Previous: Sikhs in Malaysia angry at tonsuring act
Next: Report on Sikh genocide sought from collector