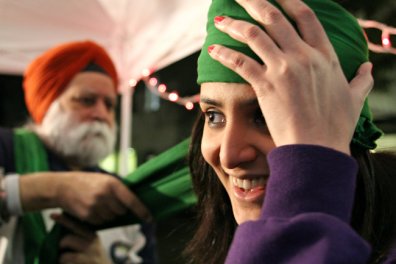 Students walked up and down the West Mall to learn about different South Asian cultures by playing trivia games, eating traditional Indian foods and watching a variety of cultural performances. South Asian organizations, including the Hindu Students Association and Pratham UT, joined the Sikh Students in raising awareness about South Asian cultures. Desi is a term used to refer to the people and cultures of the Indian subcontinent.“One of the main goals of our organization is to foster a campus-wide understanding of cultural diversity, particularly as it relates to Sikhs and people of Punjabi origin,” said Harleen Deol, vice-president of the Sikh Students Association. “By organizing this event, we wanted students to get a first-hand experience of the different South Asian cultures and religions in hopes of spreading awareness of our under-representation on campus.”

Public health and pre-med senior Shikha Shah said she is from the Gujarati culture, but there are also similarities that she shares with people from the Sikh culture.

“This is the Sikh culture, but it’s mostly the same because we also eat pani puri and we also do henna,” Shah said. Pani puri are small, hallow balls of bread filled with different kind of fillings. Henna tattoos are temporary ink patterns on hands and arms.

Students of South Asian cultures and those who are not were able to learn interesting facts about the different groups represented at the showcase. The Nepalese Student Association held a trivia game booth to teach students about the Nepalese culture.

Arbeena Thapa, anthropology junior and president of the Nepalese Student Association, said she was grateful to be invited by the Sikh Students to participate in the event and share the Nepalese culture.

“We wanted to spread the knowledge on Nepalese culture as well as our heritage,” Thapa said. “We also wanted to show that we’re in solidarity and want to collaborate with other South Asian organizations and not be so separated and fractured.”

Amrita Kanwar, chemical engineering sophomore and member of the Sikh Students Association, said the level of interaction at the event was great because students were open to learning about the South Asian cultures and having fun with it.

“I think multicultural awareness is important because you can accept people easier if you know where they’re coming from and that just makes for a more successful community, a successful work life and a more successful educational life,” Kanwar said.