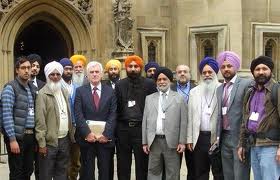 US Federal Judge Disqualifies Himself From Badal’s Case

Wisconsin,USA: After Judge Randa unexpectedly disqualified himself pursuant to 28 U.S.C. § 455(a) and (b), from presiding over the human rights violation case against Badal, Judge Lynn Adelman of the US Federal District Court of Wisconsin held a preliminary status conference on January 14 with attorneys from both sides.
While Plaintiffs’ claimed serving Badal on August 09 at Oak Creek High School, attorneys representing CM Badal sought dismissal of the human rights violation case due to lack of service based on the sworn statements of Special Agents from Diplomatic Security Service of US Department of State claiming that Badal was not present at Oak Creek High School at that time.

After hearing the position of attorneys representing ‘Sikhs For Justice” (SFJ) and CM Badal, Judge Adelman set the case for hearing on February 21 to examine the witnesses and evidence.

Sikhs for Justice (SFJ) has initiated “discovery process” to obtain the details of shopping from Boelter Super Store in Milwaukee by Badal and the names of SAD (Badal) members from US who held meetings with CM Badal during August 2012 Milwaukee visit. SFJ has received additional affidavits from individuals who have been tortured by the police during Badal’s tenure as CM to be included in the ongoing human rights violation case in Wisconsin Court. The authenticity of the claims of these additional torture victims have already been established as they have been granted ‘Political Asylum” by the US Federal Court.

Rights Group will file a motion before Judge Adelman to add these torture victims as additional plaintiffs in the pending human rights violations case against CM Badal.

According to attorney Gurpatwant Singh Pannun, legal advisor to SFJ, to prove service of summons on Badal, plaintiffs will present evidence and witnesses to show that on August 09, CM Badal was personally served by Christopher G. Kratochvil, a professional process server from “State Processing Service Inc.” at Oak Creek High School, Wisconsin. The claim of Special Agents from US Department of State that on August 09 CM Badal was actually busy shopping absenting himself from national event organized in the memory of Sikh victims of Oak Creek Gurudwara shooting is inherently implausible, added attorney Pannun.

CM Badal is facing the lawsuit in the US Federal Court filed under Alien Torts Claims Act and Torture Victims Protection Act on the charges of custodial torture and shielding the Police officers responsible for torture, extra judicial killings and continuous human rights violations against the Sikh community in Punjab. The plaintiffs in the case are Sikhs For Justice (SFJ), SAD (Amritsar) headed by Simranjit Singh Mann and several individuals who were tortured during the Badal regime.