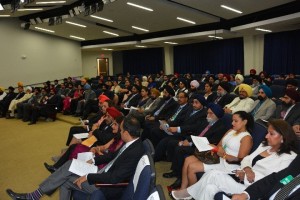 US celebrates 100 years of Sikh arrival

Washington, USA: The United States has acknowledged immense contribution of the Sikh community in its socioeconomic fabric and cultural milieu as it celebrated the 100 years of the arrival of Bhagat Singh Thind, who led a life-long battle for the rights of Indians to gain American citizenship.

Thind, who arrived in the US in July 1913 from Amritsar, was the first turbaned Sikh to fight in the American armed forces and fighting a legal battle to obtain citizenship for him and many others.

“The goal of this event is to acknowledge the contributions this community has made to the country, celebrate 100 years of achievement, the immigrant success story in America and also to acknowledge the horrible tragedy of Oak Creek last year,” said Paul Monteiro, associate director of the White House office of public engagement.

Organised last week by the White House office of public engagement, with the cooperation of the Sikh Council on Religious Education (SCORE), leaders of the Sikh said that they still have a long way to go in the US, even though they have accomplished much in the 100 years. “At the end of the day, we are celebrating today our Sikh heritage and that identity is an identity this President (Barack Obama) truly does appreciate and respect in a lot of important ways,” said Amar Singh, a member of the White House Commission on Asian American and Pacific Islanders.

For the first time in over 30 years, three turbaned Sikhs were allowed to serve in the US military under this administration and just a month.

“But the work is not over yet,” says Singh.

“This is perhaps the first time that such a collection of prominent Sikh business leaders has gathered at one place. It shows that as a community, we have generated wealth and jobs and proved our vitality,” said Singh, chairman of SCORE.

During the event, Sikh entrepreneurs reflected on their positive experiences within American business.

Sunny Singh, president and CEO of Edifics, described his immigration to the US and the challenges he faced as a businessman, going from near bankrupt to financial success. “America embraced me and gave me an opportunity to survive and thrive. Values of my faith, Sikhism and US founding principles, coincided to give me the strength to create an opportunity for myself,” said Gurpreet ‘Sunny’ Singh, CEO, Edifecs Inc., a multimillion dollar company in Seattle, Washington.

Previous: New Congressional effort launched to enlist Sikhs in American Army
Next: Husband and wife jailed for attacking Sikh taxi driver and ripping off his turban