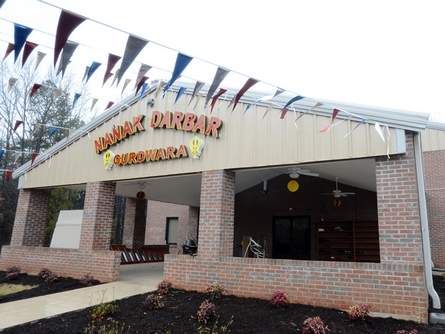 Duncan Scott, USA: The Upstate Sikh Society is dedicating the first Sikh temple (called a Gurdwara) in the area. After nearly two years of construction, they have a community center and temple in which to worship and share their faith.

After meeting for more than 40 years in various rented spaces, the Upstate Sikh Society finally has a place to call home.

A new 3,600 square-foot Sikh Temple is now open in Duncan and will serve as the gathering place for about 45 to 50 worshipers from Greenville and Spartanburg counties.

“We are very excited about having a home,” said treasurer Daljit Kalsi, who moved from India to Greenville in the 80s.

According to the Encyclopedia of World Religions, Sikhism was founded in India in the late 15th century by Guru Nanak and is the youngest and least known of the world’s monotheistic religious traditions. Though historically associated with the Punjab, a region that connects southern Asia with the Middle East, more than 2 million Sikhs now live and work in North America, Western Europe and many former British colonies. Worldwide, there are more than 18 million Sikhs.

As the following in the Upstate grew, Kalsi said it took time and money to open the area’s first Sikh Temple.

“We all (in the society) started raising money the first week of April in 2004,” he said. “This has been a whole community effort. Everyone helped out.”

In November 2011, construction finally began on the $800,000 temple, which is named Gurdwara Nanak Darbar, after the religion’s founder. The society decided to build in Duncan because congregants are divided almost evenly between Greenville and Spartanburg.

“Instead of raising the money to build a temple in both counties, we just built one in the middle,” Kalsi said.

The location will be more convenient for congregants previously traveling much greater distances to worship.

According to a news release distributed by the Upstate Sihk Society, the new temple is “a decades old dream for a small, but thriving religious community in the Upstate.”

On a recent Friday, the aroma of Indian food drifted through the temple. A group of worshipers with turbans wrapped around their heads sat barefoot on the floor and listened as a female congregant read from the Adi Granth, the canonical scripture of the Sikhs.

The turbans are worn out of respect to God, Kalsi said.

The community is invited learn more about Indian culture and Sikhism on Sunday at an opening celebration from 10 a.m. to 2 p.m.

“The community has been very nice to us,” Kalsi said. “We have been really pleased. No problems. We are really excited to be here, and we want to share our excitement with others in the community.”

The celebration promises a chance to experience the group’s music, culture and religious traditions.

Free Indian food will also be available. But Kalsi warned visitors shouldn’t expect to find meat on the table.

“We don’t smoke, we don’t drink and we don’t eat meat,” Kalsi said.

A new Sikh temple is opening in South Carolina.

The Upstate Sikh Society on Sunday is holding an official opening celebration of the first Sikh temple in the northwestern part of the state. Officials say the new temple in Duncan has been under construction for two years.

Organizers of the grand opening say the event is a way to experience food, music and culture from the Punjab part of northern India. Until now, Sikhs in the Upstate have worshipped in homes or other temples throughout the Carolinas.

Gov. Nikki Haley was raised in the Sikh faith but now identifies herself as Christian.