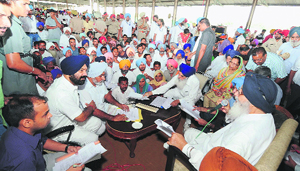 Giddderbaha, Punjab: Describing the turban as an integral part of Sikh identity, Chief Minister Parkash Singh Badal today said the Centre must mount pressure on foreign nations to ban the removal of the turban at international airports for security checks.

Talking to the media on the second day of his Sangat Darshan in the Gidderbaha assembly segment, the Chief Minister said it was unfortunate that Delhi Sikh Gurdwara Management Committee (DSGMC) president Manjit Singh GK had been asked to remove his turban during frisking at the international airport in Rome.

“The removal of turban on the pretext of security check is an assault on the Sikh identity,” Badal said. He said he would take up the matter with the Prime Minister and the Foreign Affairs Minister. Badal accused his estranged nephew, PPP president Manpreet Singh Badal, of being a tool in the hands of the Congress. “By joining hands with the Congress, Manpreet has proved that he hardly has any ideological commitment,” Badal said. The Chief Minister honoured 122 Akali workers and their kin who were imprisoned during various Akali agitations.

New Delhi: Angry with security officials at the Rome airport for asking DSGMC delegation members to remove their turban for a security check, a large number of Sikhs held a demonstration at Teen Murti Chowk here on Wednesday.

Muktsar: Strange but true, but whenever Chief Minister Parkash Singh Badal holds a Sangat Darshan programme in his home district of Muktsar, he uses two chairs that belong to the Lambi police station. The specially designed chairs have been modified as per the wishes of the ageing Chief Minister. “The chairs were specially made for him almost five years ago. To make these more comfortable, the arm-rests have been cushioned and the upholstery changed,” said a police officer. He said these chairs, kept under lock and key at the Lambi police station, were broader than the usual ones.

Previous: DSGMC chief told to take off turban at Rome
Next: Copy of 1809 Amritsar treaty up for UK auction