Ottawa, Canada: French Prime Minster Jean-Marc Ayrault will be visiting Canada. The Ontario Gurudwaras Committee (OGC) is writing today in support of United Sikhs’ request to the Canadian Government to voice their objection against the ban in France and in doing so, to comply with the UN ruling opposing the decision. The OGC has been advised that the United Sikhs have urged The Canadian Government to object the ban against the turban with the French Prime Minister and are in full support of this democratic measure.

Late last year, the UN Human Rights Committee ruled that France was in violation of Sikhs right to manifest their religion calling the ban “conspicuous”. The UNHRC also agreed that the turban is regarded as a religious duty for a Sikh which is inherently tied with his or her identity, and that France was in violation of religious rights protected by International Covenant on Civil and Political Rights (ICCPR).

Amarjit Singh Mann, Spokesperson for the OGC says, “We feel privileged to be living in a country like Canada where the turban has been a symbol of pride and honour for all Canadians. It only makes sense that our Government stand up against any such ban which impedes on such a fundamental Canadian value”

In a country that exemplifies religious and cultural tolerance and promotes diversity, it is only fitting that the Canadian Government objects this ruling. All one has to do is look at Federal and Provincial levels of Canadian Government where one will find prominent and accomplished turban wearing Canadian Sikhs who are major political figures. In 2011, Lt.Col. Harjit Singh Sajjan became the first turbaned Sikh in Canada to take command of a British Columbia regiment. Police Departments across the country and other public services, as well as the RCMP, are strong examples of areas where turban wearing Sikhs have excelled and flourished with great pride. Sikhs in Canada have been a crucial part of the Canadian diaspora and many have chosen Canada as their home because of its stance on equality and religious tolerance.

Globally, turbaned Sikhs have made huge strides. Late last year the British Government made history when a Sikh Soldier became the very first guardsman to parade outside Buckingham Palace wearing a turban instead of the traditional bearskin. Looking some of the darkest moments in history, Sikh soldiers stood, in their turbans, shoulder to shoulder with the French Troops during World War 1, and it is known that they used traditional Sikh weapons and the Sikh battalion was often seen carrying the Sri Guru Granth Sahib.

The OGC would like to invite Prime Minister Ayrault to visit any of the local Gurudwaras in Ontario or Quebec to learn more about Sikhism and the relevance behind the turban for Sikhs. We would be more than happy to assist in making the arrangements for his visit.

We urge both Premier Kathleen Wynn and Prime Minister Stephen Harper to ensure that France does their due diligence in complying with the reversal of the turban ban by taking the opportunity to discuss this with French Prime Minister Jean-Marc Ayrault upon his visit, which has begun today. 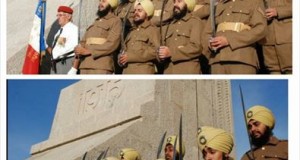