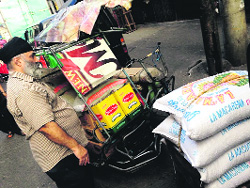 Sacramento, USA: USA-based association United Sikhs has sent a relief team to the Philippines to help victims of Typhoon Haiyan. The team is led by Rishiwant Singh and Kiran Singh. The first batch of goods and supplies has filled the United Sikhs’ stock room in Khalsa Diwan Sikh Gurdwara, Manila.

The Department of Agriculture has reported a shortage of certified rice seed critical to rice-growing areas of the Leyte and Samar regions.

For now, the team will feed at least 200-300 survivors on a daily basis, serving them two meals a day. Besides providing meals, team members would also provide medical aid to those affected. They said they would expand their reach and impact as there were many who were stranded and homeless.

The team members met various survivors, who narrated their experiences during and after the storm. They talked about the exodus, which had occurred two days after the storm subsided.

Sawinder Singh (26) said, “Thousands of shell-shocked victims, including children and the elderly, walked 20 km for eight hours with dead bodies scattered all around, to move out of the affected area.” He said he had survived as his house was on a little hill about 25 feet higher than the ground level.

United Sikhs is an organisation which works for the welfare of society at the grass-roots level.