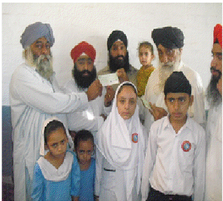 Peshawar, Pakistan:United sikhs has extended its Rescue A family (RAF) project, to the Internally Displaced Persons (IDPs) of the Khyber Agency in Pakistan, who now live in Peshawar. We are also grateful to the Bangkok Sikh Community, who has, as always, responded to UNITED SIKHS’ appeal for funds to help the IDPs. However, more funds are needed to rehabilitate the remaining 28 IDP families,” said Herdyal Singh, UNITED SIKHS Project Aid Co-ordinator in Pakistan.

“We (Satsangat of Thailand) are grateful to UNITED SIKHS and the sewadars who devote so much time and effort for the welfare of the Panth and to all who are in need, regardless of race, creed or faith. Please keep up the good work. We are all with you,” said Pinderpal Singh of the Bangkok Sikh community.

A fortnight ago, the mutilated body was found of S Mohinder Singh, a 40 year old father of eight children, who was beheaded by militants in the Khyber Agency. His family needs your support too. Read a recent press release about the brutal killing of Mohinder Singh

Last week, Raghbir Singh, a 40 year old father of four, was kidnapped in Peshawar and his fate is unknown. Read a media report about it

Pak:In recent months, UNITED SIKHS has spent £15,800 to rehabilitate 42 of the 70 internally displaced minority families from the troubled Khyber Agency, who were forced last year to flee their homes and settle in Peshawar and Punja Sahib Hasan Abdal. Some families have been given funds towards the opening and running of small shops and others for opening savings accounts. Among the neediest were families whose breadwinners, Satnam Singh and Sardar Singh, were killed by mortar shell fire in the Khyber Agency in 2011. These two families received a donation of £2067 each, which was invested in Government Widows Bahbood Saving Schemes. Four other IDP families in critical need, who received £1000 each, included the widow, R Kaur, whose husband, Sher Singh, was killed by militants in 2009. Click for details of help given by UNITED SIKHS to the 42 displaced families from the Khyber Agency. Click  for photos of IDP families who received help and a video of the families receiving help may be viewed

“There are at least 28 other IDP families who are in need of help and support. UNITED SIKHS appeals for donations in this worsening situation for the rehabilitation of these displaced and distressed families who had to flee from danger, abandoning their shops and homes, and are now without any means of livelihood,” said Mejindarpal Kaur, UNITED SIKHS director.

“The demand for help from the Internally Displaced Persons (IDPs) was so urgent that we had to divert funds to them from our Rescue A Family project in the UK. We, therefore, urge our supporters to open their hearts and respond to the appeal for funds to help more IDP families,” added Mejindarpal Kaur.

“We are thankful to UNITED SIKHS and the Bangkok Sikh Community who assisted Sardar Singh and Satnam Singh’s Families for their immediate needs. We are now appealing to UNITED SIKHS supporters around the world to also support the education of the young children from both of the families”, said R. Singh, the late

Sardar Singh’s nephew “When the fourth security operation began in the Khyber Agency, we were not allowed time to collect our stocks. Our shops remained shuttered from December 2009. The stocks rotted and we suffered a lot. We are again in a difficult situation as a fifth military operation has taken place. I also lost my younger brother in BARA and the government said it would help but no help has arrived. It was UNITED SIKHS who supported Sardar Singh’s family in this hard situation”, said H. Singh brother of late Satnam Singh.

On-going security operations in the Federally Administered Tribal Areas (FATA) have caused further displacements across the region, adding to the almost half a million people already displaced in the area since 2008 and unable to return home. According to UNHCR figures as of September 2012, the total IDP population in FATA and KP has reached 160,063 families (724,765 individuals), including 141,280 families (88%) settled in off-camp locations and 18,783 families (12%) residing in-camp. Of these 391,376 (over 50%) are children under 18 years of age.

Since June 2012, the registered IDPs from the Khyber Agency stands at 68,274 families, of which 9,263 families are accommodated at the Jalozai camp and the remaining 59,011 families reside with host communities. Residents in areas of Peshawar, close to the border of the Khyber Agency, frequently report loud explosions in the distance at night and officials anticipate a possible increase in the number of displaced persons.

You may donate online at or post a cheque payable to UNITED SIKHS or to a UNITED SIKHS office nearest to you. For details of our offices click

To transform underprivileged and minority communities and individuals into informed and vibrant members of society through civic, educational and personal development programs, by fostering active participation in social and economic activity.

UNITED SIKHS is also an avenue for networking between like-minded organisations to establish and nurture meaningful projects and dialogues – whether social, cultural or political- to promote harmony, understanding and reciprocity in our villages, towns and cities.

UNITED SIKHS is a coalition of organisations and individuals, who share a common vision based on the belief that there is no greater endeavour than to serve, empower and uplift fellow beings. The core of our philosophy is an unwavering commitment to civic service and social progress on behalf of the common good.

Accordingly, UNITED SIKHS has sought to fulfil its mission not only by informing, educating and uplifting fellow beings but also by participating in cross-cultural and political exchanges to ensure that the promises and benefits of democracy are realized by all.

We at UNITED SIKHS believe that the development of enlightened and progressive societies can be made possible by socially conscious groups of people who make a commitment to develop and direct human potential. Our work, efforts and achievements stand as a testament to our faith in this vision.