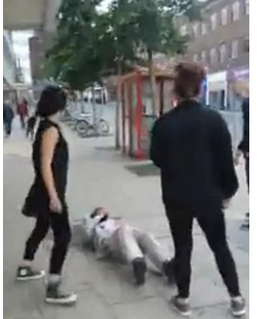 London, UK: A teenaged British girl has been arrested for assaulting an 80-year-old Sikh man after a video of the incident went viral online.

The elderly victim was punched in the face and shoved to the ground. His turban fell off and the attack left him with a bloodied nose and black eye, British media reports said.

The 19-year-old girl abused the man and spat on him before walking off. The attack, apparently unprovoked, occurred near a bus station in Coventry’s Trinity Street at 8.30pm on August 10.

Closed- circuit television (CCTV) footage showed the pony-tailed girl, accompanied by three young males, kicking and knocking down the elderly person, who reportedly hails from the Canley neighbourhood of the city. The girl was dressed in black and was wearing a pair of Converse shoes.

Police acted after a video of the incident, recorded by a passer-by on a mobile phone, went viral online and was shared on Facebook.

The attack took place in full view of passers-by with nobody intervening. According to the Telegraph report, the girl also spat on the victim and verbally abused him. Only one person came out to help — and that too after the girl and her companions had left the scene — as he picked up the Sikh man’s turban. The girl was arrested on Friday, with police saying she would be questioned about the attack. Police are treating the attack as “serious malicious wounding”, which is punishable with up to five years in prison. The video of the attack triggered a wave of revulsion after it was circulated on social media, The Telegraph said.