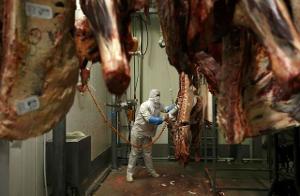 London, UK: British Sikhs have fiercely opposed a proposal to set up a meat plant next to a prominent gurdwara in the city of Bradford in England. Food firm Pakeezah wants to convert a disused car repair workshop on Percival Street into a wholesale meat plant and the plans will come up for approval at a local meeting on Tuesday.

But Bradford’s Sikh community fears the redevelopment could mean the smell of meat wafting into the Guru Gobind Singh Gurdwara building. “Many of our people are strict vegetarians and the notion of meat being so near to the gurdwara is disrespectful and insensitive,” Kuldip Kaur Bharj, secretary of the Board of Bradford gurdwaras, told the Bradford Telegraph.

“The analogy of putting a pork butcher beside a mosque or synagogue is a good one. Although we do not eat halal meat, we do not condemn it as repugnant because we do respect other religions. It is really that the smell of meat is very offencive for people who don’t eat it,” Bharj said.

In a letter to the local council planning officer, gurdwara president Kuldeep Duley wrote: “A butchery plant should be on an industrial estate rather than next to a place of worship where people will be exposed to the disgraceful smell.”

“We would never dream of doing anything that might cause offence to our neighbours and many of our customers are Sikhs,” Pakeezah director Tariq Haq stressed.

Previous: DSGMC to make missions aware
Next: SGPC, the biggest landlord in this part of the country