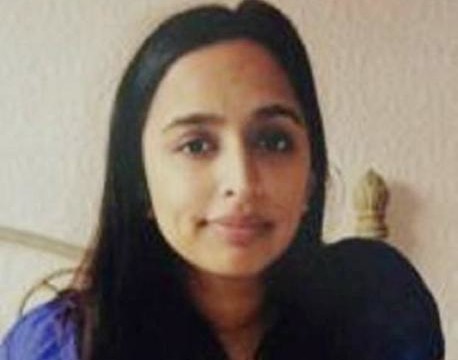 London, UK: The body of a woman discovered in a river recently in northern England is that of a missing 35-year-old Indian-origin woman, police said.

Seemberjeet Kaur had disappeared from her home in Bradford city since October 23 and police had issued an alert expressing concern about her well-being as the mother of a four-year-old child was reportedly under medication for depression.

A member of the public had reported a body in the River Aire near Leeds station on Thursday.

West Yorkshire Police have now confirmed a post-mortem examination was carried out on Friday and the body has been formally identified as that of 35-year-old Kaur.

Her death is not being treated as suspicious and her next of kin have been informed, they added. Kaur had sparked a massive police search when she failed to collect her daughter from nursery on October 23.

There had been no positive sightings of her since about 1 pm that day, when she was captured on CCTV on the Leeds-Liverpool canal towpath near Roberts Park, Saltaire. Kaur had taken a taxi to Salts Mill from her home at about 10 am.

Officers said they were particularly concerned for her welfare because she was suffering from anxiety and may wrongfully have had concerns about her health.

According to the ‘Bradford Telegraph’, police underwater teams had been carrying out searches along the canal and the River Aire from Saltaire towards Leeds, as well as scouring the park, woods, gardens and outhouses.

Detectives also carried out sonar searches concentrating on a small stretch of the River Aire which flows through Roberts Park.

Two weeks after she went missing, officers carried out an “information seek” operation in the park, where residents were shown a photograph of Kaur and asked to fill out questionnaires to establish whether they might have seen her.

Her family had spoken of their hope she was still alive, saying her disappearance was out of character.

The city’s coroner has been informed and an inquest will be held into the death in due course.