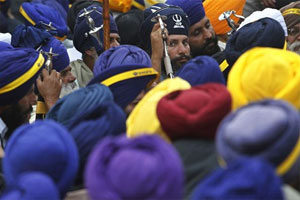 Washington,USA: Citing last year’s Gurdwara shootout in Wisconsin, a group of 26 Senators from the Democratic party has asked the US Attorney General Eric Holder and FBI Director Robert Mueller to start tracking hate crimes against Sikhs, besides Arabs as soon as possible.

“These senseless acts of hate-fuelled violence committed against individuals and groups leave a deep impact on the targeted community as a whole. Communities shaken by hate crimes experience widespread fear and terror in the aftermath of bias-motivated crimes,” the Senators wrote in a letter to Holder and Mueller yesterday.

“We must continue our efforts to promote tolerance and prevent hate crimes. We can more effectively respond to hate crimes against Sikh Americans, Hindu Americans, and Arab Americans with accurate measurements of those crimes,” they said in the letter, a copy of which was released to the press.

“We write to respectfully request that you make three additions to the Hate Crime Incident Report form as soon as possible. In short, we believe that the form should be revised to collect data on hate crimes motivated by bias against Sikh Americans, Hindu Americans, and Arab Americans,” the Senators wrote.

The Senators delegation was led by Senator Dianne Feinstein, Chairwoman of the Senate Intelligence Committee, and the Assistant Majority Leader Dick Durbin.

The letter follows up on a promise the Department of Justice made last year to include this data in future reports. The Department’s Advisory Policy Board is currently reviewing these changes and the Senators asked quick adoption of the Board’s recommendation.

The Senators said Sikh Americans have frequently been the targets of hate-motived crime due to the “visible religious articles” they wear, including uncut hair that men, and some women wrap in a turban.

“While some hate crimes against Sikhs may result from the perpetrator mistaking the victim for a Muslim, it is clear that Sikhs have been the targets of bias for their own religious identity in many instances,” they said.

Despite the Sikhs being frequently targeted, the hate crimes against the community continued to be inaccurately included in the “anti-Islamic” and “anti-other religion” categories on the Hate Crime Incident Report Form.

Without accurate, nuanced reporting of these crimes, it is more difficult for federal, State and local law enforcement to assess and respond to the particular threat that the Sikh community faces.

Through an outpouring of written testimony submitted to the Subcommittee for the hearing, a diverse coalition of organisations and individuals agreed that a failure to adequately collect data on hate crimes against Sikh, Hindu and Arab Americans made it difficult to know the scope of attacks and to combat hate crimes against these communities.