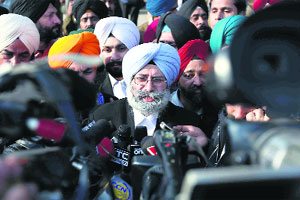 The Sikh who won’t give up

Delhi, India: I don’t know if the universe likes irony or whether these are just coincidences that only reporters are interested in. Congress leader Jagdish Tytler has spent a large part of his life living on a road in the capital called the Gurudwara Rakabganj road, and has spent a substantial part of that time defending himself against the killing of Sikhs at the Gurudwara Pul Bangash during the 1984 Sikh genocide . He lives there in a government bungalow that’s barricaded by gunmen — it’s a reminder that he gets government protection for a perceived threat from Sikh militants while the families of 3,000 genocide victims have got nothing.

It’s a contrast that at least one Sikh hasn’t forgotten. Senior advocate H S Phoolka recalls in his book, When A Tree Shook Delhi, how he and his pregnant wife went from one place to another seeking shelter, how his wife couldn’t climb on to the army rescue truck because of her condition, and how their landlord changed — from hiding them in his closet from rioters to evicting them. Phoolka and his wife would have left Delhi for good, but it was a trip to the Farash Bazaar relief camp which made him decide to help other Sikh families. And just as the proud sardar refused to shave his beard and get rid of his turban during the riots, he has stubbornly refused to stop chasing those Congress leaders who were named by the victims repeatedly,

Leaders like Jagdish Tytler who was number six in the very first report of citizens’ groups like PUCL and PUDR called ‘Who are the Guilty’ soon after the genocide in November, 1984. The report named 198 Congress activists and 15 Congress leaders, but even at that time the report says, “H K L Bhagat, Lalit Makan and Jagdish Tytler have been given tickets — and thus clean chits by the PM.” The reports cites how brazenly Tytler barged into a press conference of the police commissioner on November 6, 1984, and demanded that his men who were in custody be released.

But that was a long time ago, when Prime Ministers got away with saying things like “when a big tree falls, the earth shakes”. What amazes me is that three decades later, after many so-called apologies by the PM, after another report, this time the Nanavati Commission report of 2005, saying it had “credible evidence” that Jagdish Tytler “very probably” had a hand in organising attacks on Sikhs, not only does the Congress continue to honour him with a prime position in the Congress Working Committee, they also come out in his defence. Very conveniently, the Congress chooses to forget its own moral high ground which they say made them sack people like Ashok Chavan at the very suggestion of corruption.

But they are politicians and from them one expects no better. What should scare us, disgust us, and then force us into activism is how CBI let itself be used to help out friend Tytler. I won’t forget the two lines on the CBI closure report I dug out of the Rohini court in September 2007. It simply said a witness Jasbir Singh “could not be examined as he is abroad”. Being the daughter of a government officer and having covered CBI for long, I never underestimate the importance of bureaucratic rules which may have some ban on contacting people abroad. But I knew it had to be brazenness which allowed them to put this explanation in writing. Also, they did not allow another witness to testify even though he sat outside their office in the US.

I felt a bit of satisfaction when H S Phoolka went on air to credit that story for reopening the probe against Tytler, but honestly, it’s not enough. For the sake of the 3,000 victims, for the sake of CBI and its independence and for the sake of those that need to know the truth about ‘84 genocide, about the coal scam and every other scam, we need activism to free the agency.