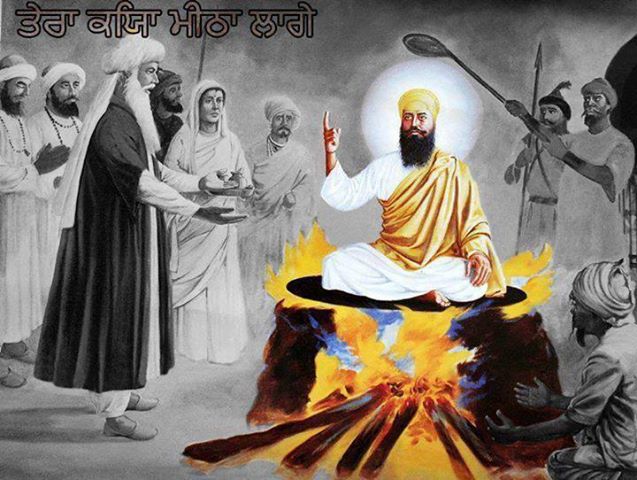 The Moth and the Flame

Comments Off on The Moth and the Flame 586 Views

Amritsar,Punjab: On Sunday, June 16, Sikhdom celebrates the extraordinary man who gave Sikhism two of its greatest gifts: its Scripture, known as the Guru Granth, and its famous shrine, the Golden Temple.

He was in the prime of his life, a mere 39 years old, when his spiritual activities were deemed a threat to institutionalized religion by the ruler of the land. Refusing to waver from his faith, he was tortured until his body succumbed.

It is on his shoulders on which stands much of Sikhi as we know it today.

So, how do Sikhs commemorate his martyrdom?

Well, here’s what we’ve never done, and still don’t do:

We don’t beat our breasts. We don’t wear hair shirts. We don’t mourn. We don’t lament. We don’t rail against the forces of evil and brandish recriminations.

But here’s what we indeed do.

In every city, town and village — in every neighbourhood where Sikhs live in large numbers — here’s what we do to mark the day: We take some water. We add milk to it. And sugar. We then add gulab jal (rose-water) to give it flavour. We add chunks of ice to chill the beverage.

Then, on the day marking the great martyrdom — invariably, the peak of the sub-continental summer, when temperatures simmer and bake in the Celsius 40s — we set up stalls outside our homes and businesses, on the side-walk, at street-corners.

Chhabeels is what these shacks are called. Where we serve the refreshing libation to all passers-by. Free.

Nay, many do better. Volunteers spill into the streets and gently stop the traffic and offer the kacchi lassi — the refreshing concoction I’ve just described to you — to those in cars and buses, rickshaws and tuk-tuks, and ask for, and accept, nothing in return.

It brings no medals. No awards. No certificates. No media coverage.

It’s done for the sheer joy of it all. Year after year. Century after century.

This is how we celebrate — yeah, CELEBRATE! — the great sacrifice. It is simple. It captures everything that Sikhi offers. There is no greater glory. This is how we remember this Ideal Person, who did so much that we enjoy and treasure today.

Arjan was born at Goindval, Punjab in 1563 to Bhai Jetha (who later came to be known as Guru Ram Das, the fourth Sikh Teacher) and Bibi Bhani.

Though the “baby” of the family, he was deeply spiritual. Impressed by his true piety, his father named him his successor as the next Teacher; he took the mantle at the young age of 18, when the former shed his mortal coil.

Guru Arjan was a walking institution: In the ensuing 23 years of his life, he led the still-nascent community — the spark was lit by Nanak, the founder, who was born only a century earlier, in 1469 — into maturity.

He began and completed the construction of the Golden Temple in the middle of the tank in which it sits today. At the commencement of the project, he did something revolutionary: He asked Sayeen Mian Meer, a respected Sufi from Lahore — a man of a different faith — to lay the cornerstones of the new structure.

Arjan also started, and took to fruition, the monumental task of compiling the authentic compositions of the preceding Gurus and 15 poet-mystics (blonging to a variety of faith traditions) whose spirituality was in consonance with that of the Gurus.

The investiture of the new Granth (scripture) in the new structure took place in 1604. A learned centenarian, Baba Buddha (not to be confused with the founder of Buddhism), became the first steward.

Arjan was a poet, a linguist, and a musician par excellence. He combined his talents not only in compiling the bani, but ultimately became its biggest contributor through as many as two thousand verses, which now comprise one-third of the Guru Granth.

He came to be known as Saccha Padshah, the True King, to his contemporaries. Which did not go well with the Mughal Emperor, Jahangir, and the Muslim clerics that surrounded him.
Jahangir wrote in his Tuzk: “So many of the simple-minded Hindus, nay, many foolish Muslims too, have been fascinated by the Guru’s ways and teaching. For many years, the thought had been presenting itself to my mind that either I should put an end to this false traffic, or he be brought into the fold of Islam.”

Ultimately, Jahangir had Arjan taken prisoner and presented with the choice in Lahore.

He was tortured over the course of several days, with hot plates, burning sand and boiling water.

A Hindu official, Chandu, encouraged the Mughal. On the other hand, Sayeen Mian Mir, the Sufi Saint of Lahore, offered to intervene. The Guru declined his help.

With “Sweet is Thy Will, O Lord …” on his lips, he was taken to the River Ravi nearby.

“A dip in the river’s cold water was more than the blistered body could bear,” writes historian Gurbachan Singh Talib. “Wrapped in meditation, the Guru peacefully passed away.”

A Jesuit, Father Jerome Xavier, who witnessed all these goings-on, in a letter he wrote from Lahore on Sept. 25, 1606, says: “In that way their good Pope died, overwhelmed by the sufferings, torments, and dishonours.”

Bhai Gurdas, the great poet, scribe and chronicler of Sikhi, described it thus:

As fishes are at one with the waves of the river,
So was the Guru, immersed in the River of the Lord:
As the moth submits itself to the flame,
So was the Guru’s light merged with the Divine.
In the extreme hours of suffering,
Aware was he of nothing but the Word Divine,
Like the deer who hears no sound
But the ringing of the hunter’s bell.

Like the humming-bee who is wrapped in the lotus,
He passed the night of his life in a casket of bliss;
Never did he forget to utter the Lord’s Word,
Even as the chatrik never fails to utter his cry.

To the man of God, joy is the fruit of devotion and meditation
With equanimity in holy company.
May I be a sacrifice unto this Guru Arjan!