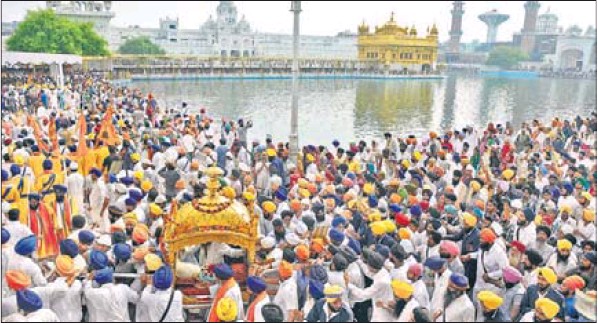 Amritsar, Punjab: In 1604 began the journey of Guru Granth Sahib from Gurdwara Ramsar Sahib to Harmandar Sahib, where the first “parkash” (sermon) of the Sikh scripture was done, and has since continued through the centuries.

Commemorating this historic journey, Shiromani Gurdwara Parbandhak Committee (SGPC) on Sunday organised a religious procession here though the same route, during which voluntary organisation EcoAmritsar, in the spirit of “seva” (service), cleaned up every bit of litter from the streets after the marchers had moved on. Nagar Kirtan and “langar” (community kitchen) were organised along the way.

“The ‘Bani’ (holy verse) of the Gurus considers maintaining cleanliness a ‘seva’. The SGPC was kind to agree to our suggestion to clean up after the procession,” said EcoAmritsar chairman Gunbir Singh. The Eco Youth Club from the Khalsa College of Engineering and Technology joined hands with students of other schools and colleges and the “sangat” (religious congregation) in collecting more than 50 bagsful of garbage and educating people on environmental issues.

“The sewadars (volunteer workers) at ‘chhabils” (sweet water stops) and ‘langar’ also agreed to use biodegradable leaf ‘patras’ instead of styrofoam utensils,” said Gunbir. The devotees said they would like the Akal Takht jathedar to issue a directive to the organisers of religious processions to prevent littering of the streets during functions.