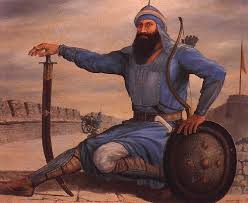 The general of sparrows about the life of Banda Bahadur

India: In the recent past a senior administrator and many times vice-chancellor in Punjab, as well as the Shiromani Gurdwara Parbandhak Committee have banned anyone other than a Sikh from writing on the religious aspects of Sikh history. Under the circumstances it is very brave of Harish Dhillon, who is not a Sikh according to the current definition requiring the five Ks as the essential signifiers of Sikhism, to have written and re-written about the life of Banda Bahadur (born 1670, died 1716). The previous version of this book, The Legend of Banda Bahadur, published in 2003, too, was well received. For not only is there an entire dera of Sikhs, based at Riasi near Jammu, that revers Banda, but people in general respectfully remember the bravery with which Banda fought the Mughal rulers.

Quickly taking us through the early life of Banda, Dhillon gives us an enchanting tale of this young man. Born Lachman Dev, he developed extraordinary skills in wielding weapons. Lachman Dev’s turning away from normal life happened when he killed a deer and on disembowelling it discovered two fully grown foetuses. The resultant feeling of guilt took him to a well-known vairagi, Swami Janki Prasad. Young Lachman Dev — he was just 15 at that time — was so impressed by the swami that he decided to leave his family and village and accompany him on a pilgrimage to Kashmir.

A few years later, as a vaishnav ascetic, he set himself up as a swami with an ashram at Nanded in Marathwada, Maharashtra. Here, when he was 38-years-old — a very old age for those times — the itinerant Guru Gobind Singh came to visit him. What exactly went on between the two is not known, but Dhillon recreates the meeting very imaginatively: the meeting of a man who abhorred killing and meat-eating with the man whose followers were cooking meat for the evening meal unmindful of their host’s aversion.

The net result of that meeting and discussions over the next few days was that Lachman Dev became a disciple of Guru Gobind Singh. The new name that the guru gave him, Gurbakhsh Singh, never really caught on. Instead, he came to be known as Banda Singh, literally meaning “servant of the guru”. The guru also bestowed upon Banda the symbols of his own authority — the kettledrum and the flag — and called upon all his disciples to accept Banda as their new leader.

Dhillon tells us of the manner in which Guru Gobind Singh drilled stories of the atrocities of Mughals on the peasants of Punjab in the head of his new acolyte.

How much truth there is in the stories of the atrocities and how much of it is a reconstruction to justify the latter-day military actions of Banda against the Mughals is a matter of historical research. Dhillon does, however, tell us how the Mughal emperor, Bahadur Shah I, lent his personal surgeon, a European, to treat the guru when the latter lay mortally injured at Nanded after an attack by two Afghans.

Anointed the leader, Banda set off for Punjab. Little is known about his motives and Dhillon, like some historians of the state, prefers to believe that Banda was out to liberate Punjab’s peasantry from the hold of the Mughals.
While little information is available of Banda as a historical figure — and the times in which this military leader lived — he continues to remain alive in the memories of people. Dhillon’s well-written book will add to that memory.

Imperial authority was already brittle after the death of Aurangzeb. Small groups across the country were hammering at it. It was only the Sikhs under the leadership of Banda who seemed to be mobilised around the idea of religion, seeking revenge for the death of their guru at the hands of Muslims and hoping to set up a just regime in accordance with the teachings of their spiritual leaders.

Oral narratives of those times also remember Banda as the killer of 5,000 Muslims at the Chhapar Chiri battle, near Chandigarh in May 1710. Dhillon revises that story entirely to reconstruct Banda as a secular and fair ruler who was not a killer with a thirst for revenge. Reader will discover many such revisions and their details.

Dhillon’s Banda is someone who earns the respect of the people by first mobilising them to destroy the local dacoits. He put into practice the idea given by Guru Gobind Singh — train the sparrow to bring down the hawk. Banda encouraged the people to stop being scared of those who oppressed them, be it the local zamindars or dacoits. He and his men looted the government treasury at Bhiwani, Sonipat and Kaithal, only to show to the people that the mighty Mughals could not even protect their treasure. Once people saw that the government was not able to curb the depredations of Banda, they began to look up to him as their leader and ruler. Many joined his army, many began to pay taxes to him. Banda, Dhillon tells us, was able to pay and equip his army well.

Soon Banda was powerful enough to attack the rich city of Samana. Dhillon explains the fall of Samana by finding fault with the amirs who ruled the city.

Banda, Dhillon writes, managed to have the local population lay siege to the amirs in their isolated compounds. Banda’s soldiers then made short shrift of the armies guarding the town. The subsequent loot of the town is quickly cloaked in terms of providing justice to the poor and needy. That refrain marks Dhillon’s narrative of Banda’s subsequent conquests, too. It seems evident that in Dhillon’s eyes, there seems to be more heroism in depriving the rich and powerful of what they possess than in ensuring that the poor and needy too get an opportunity to grow rich.

The battles that Banda fought and the treasuries that he looted seem to dominate the story. Banda’s efforts to establish a Sikh state in the name of the people or to set up an administration that ruled by giving priority to public opinion do not seem to be heroic enough to be a part of Dhillon’s story. For a description of those the curious may look at two other historical books on Banda — Discovering Banda Bahadur and Baba Banda Singh Bahadur: Battle Strategy Against Mughal Forces, written some years ago by another amateur historian, the late Surinder Singh. The list of “further readings” that Dhillon provides does not mention them.

Previous: 1,000 trees to be axed for four-laning project
Next: Notice to Sajjan on plea against acquittal