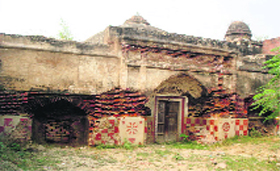 Tarn Taran, Punjab: Centuries old serai Noordin on the Delhi-Lahore route was built during the Mughal period. Located on the Tarn Taran-Jhabal road, it is in a shambles, owing to government apathy.

The serai was built on the initiative of a senior revenue official in the Mughal court, Nawab Amirudin, in 1654. It was used by government officials and traders of the time. Amirudin named the serai after his father Noor-Din whose octagonal tomb lies inside the serai. It is said that Amirudin forcibly took away bricks baked by devotees of Guru Arjan Dev, the Fifth Sikh Guru, to build the serai. Guru Arjan Dev was overseeing the development of Tarn Taran and the construction of a gurdwara there.

The serai had only two gates, of which only one remains now. There is also a mosque and a well in the serai compound. The serai was guarded by armed sepoys. It is said that chariots pulled by goats were used on the outer walls to keep a vigil during the night. Now the outer wall of the serai is barely visible. It has been dismantled by locals and the bricks re-used in their homes.

Brick powder and arches were used to wedge the bricks instead of limestone powder or cement. The walls of the tomb and the mosque had beautiful frescos which have been washed away. But these can still be seen on the mosque’s inner walls. The well is now filled with garbage.

On the southern side of the serai stands a “koss minar”, a pillar built on the Lahore-Delhi route every 9 miles. Local residents believe that it is because of the curse of the Fifth Guru that the place is in ruins. “Guru ji’s devotees had baked bricks for a gurdwara at Tarn Taran. But Amirudin confiscated the bricks and used these for building the serai,” said a local trader. The village Noordi is also known as Quila Kavi Santokh Singh after the renowned Sikh scholar who authored “Sri Gur Partap Suraj Granth.”

Previous: Will monitor langars in holy city: SGPC
Next: Illegal hotels around Golden Temple become bone of contention for authorities