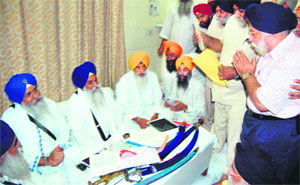 The duo has also been asked to hold an ‘Akhand Path’ in the memory of Sikhs killed in the riots at Gurdwara Rakab Ganj. They too have been told to listen to gurbani, organise ‘langar’, and perform ‘sewa’ and ‘ardaas’ for the “mistakes committed by them”.

Akal Takht Jathedar Giani Gurbachan Singh announced the decision from the balcony of the highest temporal seat of Sikhs as Sarna and his aide stood outside. The Jathedar said the decision on Sarna was reached following deliberations among the Sikh high priests after the ex-DSGMC chief gave his clarification on the issue. While the Akal Takht Jathedar maintained that asking Sarna to organise an ‘Akhand Path’ was ‘Dharmik Sewa’ (religious service), Takht Patna Sahib Jathedar Giani Iqbal Singh said it could be termed as ‘tankhah’ (religious punishment).

Sarna, however, clarified that he had not resorted to any religious defiance. “I clarified my position before the Sikh high priests too, but Akal Takht still chose to give these directions.”

Saran said the Sikh clergy told him that he had committed a ‘big blunder’ while referring to some “objectionable contents” in the petition filed by him in the Delhi High Court. “I told them the paragraphs in question were removed from the petition the very next day,” he said.

There was difference of opinion among the high priests on the decision regarding Sarna. While the Akal Takht Jathedar was in favour of seeking an apology from Sarna for his mistakes, Takht Patna Sahib Jathedar Giani Iqbal Singh differed with him. Earlier, Sarna, in his six-page clarification, said, “I had filed petition not to oppose the memorial but to remind the DSGMC that it could not be built on the premises of the gurdwara which is the epitome of the supreme sacrifice made by Guru Teg Bahadur.” He also gave various examples to support his argument. The Jathedar said a blueprint of the memorial had been sought from the DSGMC. “We will take a decision in this regard soon,” he said, adding that the affidavit filed by the DSGMC in the Delhi HC will also be examined.

SGPC member Navtej Singh Kauni, who was summoned for attending the congregation of Dera Sacha Sauda, could not make it to Amritsar as he was unwell. He has now been summoned in the next meeting. The Akal Takht Jathedar said he has issued directions to the SGPC for initiating legal action against those who tamper with Sikh Gurus’ photos on social networking sites.

Previous: Legacy of the Khalsa Seminar at Gurdwara San Jose – Live (video/audio) today
Next: Sikh clergy to deliberate on morphed photos of gurus on social sites