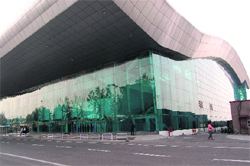 New Delhi, India: The Supreme Court today virtually put its seal of approval on the renaming of Amritsar’s Rajasansi airport as Sri Guru Ram Dass Jee International Airport by rejecting a PIL challenging the government’s notification in this regard.

“Changing the name of an airport does not undermine the contribution of any individual to the national cause,” a three-member Bench headed by Justice RM Lodha remarked while dismissing the plea by an organisation representing the ‘Sansi’ community.

However, the Bench, which included Justices J Chelameswar and Madan B Lokur, granted liberty to the petitioners to approach any appropriate forum (either the government or the Punjab and Haryana High Court) questioning the renaming. The PIL was dismissed as withdrawn.

The Bench observed that such issues were best left to the executive and the judiciary, particularly the SC, had no scope to intervene by entertaining PILs. It also did not agree with advocate Dr KS Chauhan that the Centre and the state government had belittled the role of Maharaja Ranjit Singh in the development of Punjab and in the construction of the Golden Temple at Amritsar.

“Such people and their contributions remain in the hearts of the people, irrespective of the fact whether any landmark is named after them,” the Bench reasoned.

Pleading for quashing the November 29, 2010, notification on renaming the airport, the PIL had contended that the Centre and the state government had ignored the sentiments of 30 million Sansis in the country and that the change of name was illegal, arbitrary and unconstitutional.

2013-03-09
SSNews
Previous: Manpreet non-committal on pact with Congress
Next: Delhi Sikh Gurdwara Management Committee to take up 1984 issue with PM