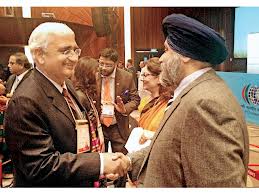 Sukhbir for visa centre in Amritsar

Comments Off on Sukhbir for visa centre in Amritsar 179 Views

In an informal meeting with the Prime Minister and Khurshid on the sidelines of the 11th Parvasi Bhartiya Divas in Kochi, Sukhbir requested Prime Minister to take up with his counterpart in Pakistan the issue of upgradation of infrastructure facilities on the Pakistan side, as exporters and importers were facing bottlenecks with perishable goods exporters being the worst sufferers.

He also requested that notification of Attari as full-fledged dry port — allowing export and import of 6,000 goods as agreed with the Pakistan government — be expedited. “The Punjab government, on its end, had already 8-laned the road to Attari and was ready to provide total infrastructure support to the Centre for successful implementation of this proposal,” said Sukhbir.

Raising the issue of a corridor to Sri Kartarpur Sahib, Sukhbir urged the Prime Minister to personally request his Pakistan counterpart to provide this corridor to the Sikh pilgrims at the earliest.

Earlier, he met NRI delegates from various countries and impressed upon them that Punjab was the future land of opportunities for investment and growth. “The Punjab government will soon notify a new industrial promotion policy and an industrial policy that had been drafted after consultation with top industrialists of the country,” Sukhbir added.

Previous: US based Sikh NGO condemns beheading of two Indian soldiers
Next: Sikh group to build centre for whole community in Barking 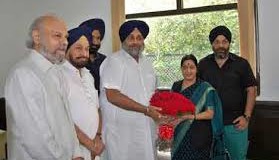