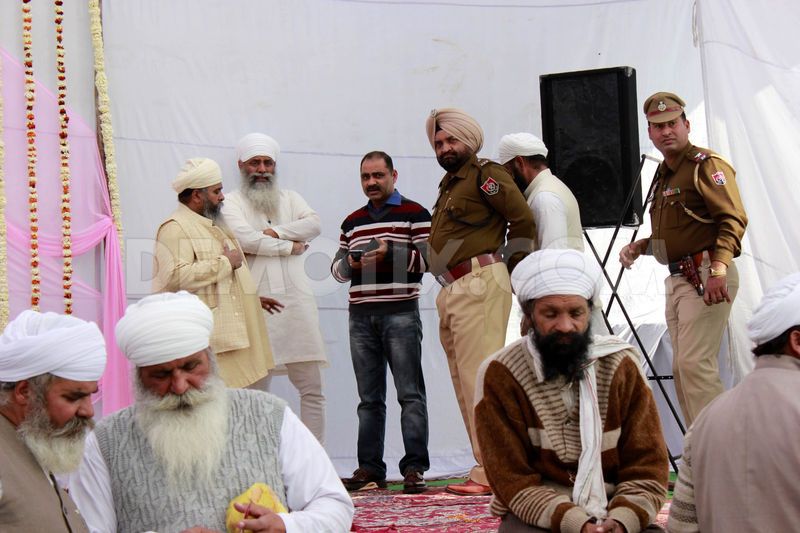 Amritsar,Punjab: THE succession row in the Namdhari sect turned violent on Monday after two groups — one owing allegiance to sect chief Satguru Uday Singh and the other to Thakur Dalip Singh, who has been staking claim as the successor — clashed in Amritsar during a congregation in the memory of late Satguru Jagjit Singh.

The police have booked four people — Sukhdev Singh, Shinda Singh, Harpal Singh and Sukhwant Singh — along with a number of unidentified others on charges of attempt to murder.

The case was registered following a complaint by Ranjit Singh, a Uday Singh supporter and Amritsar head of the Namdhari sect. Police said Ranjit Singh sustained an injury on his forehead, near his left eye, during the clash. He was later hospitalised. A couple of more people also sustained injuries in the clash, sources said.

According to sources, the clash started after supporters of Thakur Dalip Singh allegedly entered the congregation forcibly around 2.15 pm holding placards stating “Panth Ekta Zindabad”. As they were stopped from marching towards the stage, where Uday Singh and late Satguru Jagjit Singh’s widow Chand Kaur were sitting, one of them allegedly hurled a stone towards Uday Singh’s vehicle. The two groups then clashed by hurling stones and using sticks.

“Supporters of Thakur Dalip Singh forcibly entered the venue and started hurling stones. Children and women were present at the gathering. My father was injured after a stone hit him,” said Ranjit Singh’s son Harmeet Singh.

According to eyewitnesses, gunshots were also fired in the air after a ruckus ensued even as Uday Singh and Chand Kaur were sitting on the stage while kirtan was on. “We are verifying whether any shots were fired. Two DSPs and police personnel had been deployed at the venue of congregation near Company Bagh as a pre-emptive measure to avoid any untoward incident. We are not sure what caused the clash. Investigations are on in the case,” Amritsar Commissioner of Police Ram Singh said.

The succession row had broken out in the cash-rich Namdhari sect immediately after Jagjit Singh died on December 13, 2012 and his nephew Uday Singh was appointed as his successor on December 16 by Chand Kaur. Dalip Singh, Uday Singh’s brother, had been staking claim as Jagjit Singh’s successor. The International Namdhari Sangat had also reportedly backed Dalip Singh.

When contacted, International Namdhari Sangat Secretary Gurmeet Singh said allegations that supporters of Thakur Dalip Singh had forcibly entered the venue and were responsible for the clash were baseless. “Though I was not present at the spot, but I have been told that leaders from Bhaini Sahib were carrying weapons. The Sangat does not allow anyone to carry weapons. There are no supporters of Satguru Uday Singh or Thakur Dalip Singh. All supporters are only of (late) Satguru Jagjit Singh, who want Panthic unity. Some leaders are misguiding the supporters,” he said.

2013-02-26
Guest Writer
Previous: ‘I just wanted to be the class clown’: Newcastle man convicted for ripping off Sikh’s turban as a dare
Next: Manjit Singh GK New DSGMC Chief