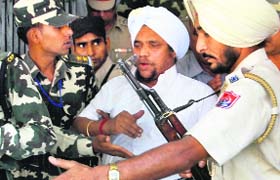 The full bench comprising justices Surya Kant, Jitendra Chauha n and Surinder Gupta directed the petitioner (Bhaniara) to submit names of experts on the next date of hearing.

The Punjab gover nment had imposed a ban on the book on December 15, 2008. Baba Bhaniara had moved the high court challenging the state government’s notification imposing the ban. The book was opposed by many members of the Sikh community on the ground that the Baba was equating himself with Sikh Gurus.

It would be for the second time that an experts’ committee would be constituted by the high court to study Bhaniara’s book. Earlier, in its report already submitted to the high court on June 3 last year, four of the five-member expert committee constituted on the court’s order had justified the ban on the book.