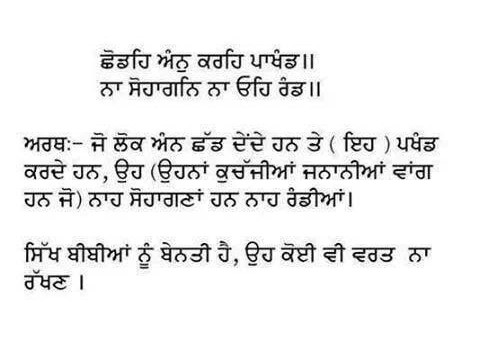 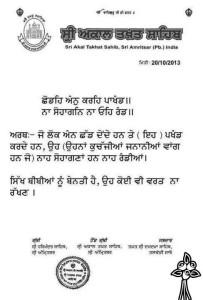 Amritsar, Punjab: The Akal Takht has taken a strong note of the fake objectionable messages supposedly issued using its Jathedar Gurbachan Singhletterhead against women observing the Karva Chauth fast, even as another message asking Sikhs not to burst crackers on Diwali went viral on phones and social networking sites on Wednesday.

The message reads, “All Sikh brothers and sisters are requested not to burst crackers on Diwali on November 3 as on this day a Sikh carnage took place in 1984.”

The message was posted on Facebook and other sites after Akal Takht jathedar Giani Gurbachan Singh on Monday was reportedly handed over a letter by Kamaldeep Kaur, sister of Balwant Singh Rajoana, who is facing death sentence in the Beant Singh assassination case.

The letter, supposedly signed by Rajoana, appealed to the jathedar to issue a directive to Sikhs not to burst crackers on Diwali in memory of those who were massacred in Delhi and elsewhere in 1984. The letter appealed to the jathedar to direct the Shiromani Gurdwara Parbandhak Committee (SGPC) not to burst firecrackers in the Golden Temple complex on Diwali, as is done traditionally.

In view of the importance of Diwali in Sikhism and the custom of bursting firecrackers in the Golden Temple, the jathedar told HT, “The decision on the letter will be taken at a meeting of the Sikh head priests.”

He did not fix the date of the meeting but indicated that it would be held early next week. He said Diwali was an important festival for Sikhs as on this day, Guru Hargobind after his release from Gwalior had reached Amritsar and Sikhs celebrated it.

SGPC sources said that as of now, no decision had been taken on the use of firecrackers in the Golden Temple. They said the head priests would take a decision on this.

A message on the Akal Takht letterhead a day before had warned women against observing the Karva Chauth fast. The message went viral with most Internet and smartphone users exchanging it. The Akal Takht has ordered an inquiry as to how its letterhead was used to circulate such a message. The jathedar has asked the SGPC to take up the issue with the police.

Police commissioner Jatinder Singh Aulakh said, “So far, we have not received a complaint; in case we get it, we will inquire into the matter.”

2013-10-24
SSNews
Previous: UK body to highlight role played by Sikhs in World War 1
Next: After 72 Years, Sikh and Chinese Troops to Fight Together