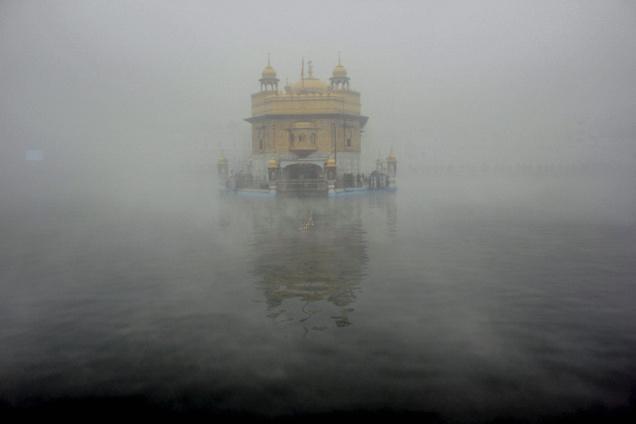 Amritsar, Punjab: As politics play dirty tricks, top leadership of the Shiromani Gurdwara Parbandhak Committee (SGPC) and the ruling Akali Dal, stayed away from a function within the Golden Temple complex, where the Jathedar of the Akal Takht, Giani Gurbachan Singh honoured on Sunday Bhai Satwant Singh and Bhai Kehar Singh.

At a function organised to mark the 24th anniversary of their hanging by Indian Sarkar, the Jathedar of the Sikh community bestowed siropa (robes of religious honour) on the relatives of Bhai Satwant Singh and Bhai Kehar Singh.

After the customary ardas (prayer) that marked the completion of the akhand path (uninterrupted recitation) of the scriptures at Gurdwara Jhanda Bunga close to the Akal Takht, the Jathedar honoured Bhai Satwant Singh’s father Tirlok Singh. No speeches were made but turnout of sangat was huge.

While the SGPC was represented by a low profile manager, H.S. Malhi, another well known Sikh leader  Sardar Simranjit Singh Mann who heads the Akali Dal (Amritsar)  attended the ceremony. Unlike the previous occasions, the SGPC did not publicise the event either.

Posted in her inner security ring, Beant Singh and Satwant Singh, had shot Indira Gandhi from close range on October 31, 1984. While Beant Singh was killed on the spot by security personnel, Satwant Singh survived grievous injuries and later tortured to death.

Subsequently, the Akal Takht and the SGPC, granted Beant Singh, Satwant Singh and Kehar Singh, the status of “quami shaheed” (martyrs of the community). Their portraits have also been displayed at the Sikh Museum inside the Golden Temple complex. Their relatives have been honoured at Akal Takht at every anniversary of their execution, for the last 24 years.

Another function was held at Agwan village, in Gurdaspur district, the native place of Satwant Singh where a Gurdwara has been constructed in his memory. One of his nephews is the sarpanch of the village. Giani Gurbachan Singh, former Jathedar Jasbir Singh Rode and Baba Harnam Singh Dhuma who heads Damdami Taksal participated in the prayer service there.