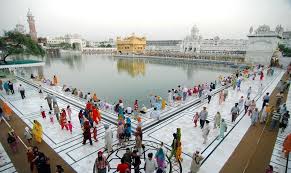 Amritsar, Punjab: Devotees visiting the Golden Temple are braving the bone chilling cold wave prevailing in the city. However, to bring respite to pilgrims, the Golden Temple authorities have undertaken various initiatives for the convenience of pilgrims.

HT Team visited the shrine to check on the special initiatives made at the Golden Temple for the convenience of devotees. These measures will remain in action till the winter bids goodbye. Now, pilgrims need not worry about washing their feet in cold water, a mandatory practice before entering the sanctum sanctorum of the Golden Temple.

T he temple authorities have made arrangements of luke warm water at the shrine’s entrance.

The carpets have not only been spread in the ‘Parikrama’ area, but also the inner corridors where a majority of pilgrims listen to the hymns. Carpets have also been rolled out till the ‘Akal Takht’ and langar hall (community kitchen).

Carpets also adorn the second floor of the Central Sikh Museum (Ajaib Ghar) to provide comfort to pilgrims.“It is a significant effort by temple authorities to roll out carpets in the winter. Walking barefoot has become difficult,” said Manpreet Dhillon, an NRI from Calgary, Canada, visiting the shrine. Inside the sanctum sanctorum of the Golden Temple, the four doors — usually kept open as per tradition — have been covered with thick white curtains to prevent cold air. The windows on the first floor of the shrine are kept shut during the dawn and dusk hours.