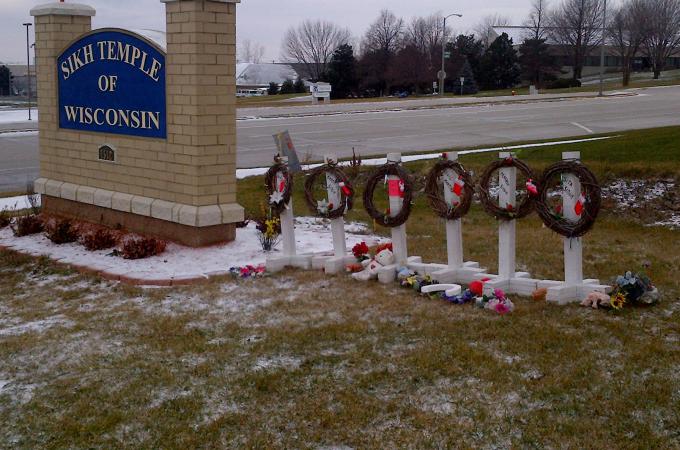 Slow recovery at US Sikh temple

Comments Off on Slow recovery at US Sikh temple 100 Views

Oak Creek,Wisconsin: As you turn the car to onto the drive to the Sikh temple in Oak Creek, next to the sign letting you know you are in the right place are six simple white markers.

A reminder of the day this unremarkable city became another place in America to suffer through gun violence. On each post, the names of the victims are handwritten.

It was August 5 last year when a man, a self-confessed white supremacist, walked into the Temple and started killing.

As he went in search of more victims, he was shot by a police officer who had arrived on the scene. Seriously wounded, the gunman fired his final shot, taking his own life.

Five months on, Oak Creek is still trying to deal with the tragedy, made harder by each new mass shooting, each new addition to the list of places forever linked to gun violence.

The Temple’s treasurer, Balhair Dulai could not quite believe when he heard the news coming from Newtown and the mass killing at the elementary school in Connecticut.

“It brought a lot of memories back, and that really hurt.

It made we want to go up there right away and be with the victims and families because we already went through that”, he told me.

In the days that followed the shooting at Oak Creek, the local community was outraged.

Thousands appeared for a candlelight vigil in the warm summer night after the tragedy to show their support. Many links established then continue now.

The Temple’s president, Kulwat Singh Dhaliwal, a former surgeon, believes the outpouring of goodwill from all over the world helped Oak Creek grieve and move on: “We received tremendous support from almost everyone in the community, from the federal and local government, we felt they were with us all the time”.

He believes that the global grief and support will also help the families in Newtown : “They will realise they are not alone. They must talk with one another. They have a common tragedy and any group discussing it will make it easier. Seeing the grief, seeing you are not alone is a big factor in helping people recover.”

Steve Saffidi was one of those to pledge his support early. He had only taken over as mayor of Oak Creek a few months before the shooting but many at the Temple say he instinctively knew the right thing to do.

He promised that the issues raised by the shooting would not go away, and this weekend he organised a public meeting to discuss community safety and the key issue, guns: “I don’t want to get these calls every other week or every week that say what are your thoughts on the shooting in Portland or New York or Newtown. It’s upsetting to me and I don’t think I would be a good leader if I didn’t try to find to solutions.”

In the Temple, there are reminders of the victims in many corners, notes from around the world stuck on walls, letters of support stacked in offices. Pardeep Kaleka’s father died in the shooting. He was the President of the Temple.

Pardeep says that five months after the tragedy, he is doing well : “The recovery has been surprisingly ok. There are moments when you break down and cry but it’s been easier because of the support in the broader community.”

Some of that has come from the people in the Temple. They decided early on the shooting would not define them or their religion, they would not been seen as victims, but instead would go out in the community and explain who they were and what their religion stood for. And they found acceptance and understanding.

Pardeep believes the day of the shooting meant things would never be normal again, and he doesn’t want to go back to the way it was before. “I hope no one ever forgets what happened. As it stands right now the community is stronger than it was before, more united.”

In the second week of January, the Sikhs hold a ceremony to celebrate the newborns that joined the community in the previous year. They build a fire and throw seeds to ward off evil. In the place where events of the past year cast painful shadows, the flames give light and hope that the damage wrought in a few bloody moments is slowly being repaired.