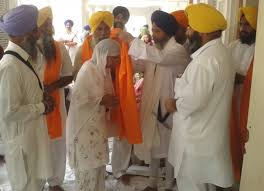 While almost the entire leadership of the Shiromani Akali Dal (Badal) stayed away from the 21st martyrdom anniversary of the Bhai Sukha-Jinda, the Sikh nationalists slammed traditional Akali leadership for “not attending” the function due to perceived fear of backlash from Hindu voters and the Indian media.

Bhai Harpal Singh Cheema of Akali Dal Panch Pardhani (ADPP), while paying tributes to “Bhai Sukha and Bhai Jinda” said both of them made the Sikh nation proud.

While speaking on the occasion Dal Khalsa spokesperson Kanwarpal Singh said “we gathered here to pay tributes to them as they are our quami martyrs who embraced martyrdom to avenge the sacrilege of Darbar Sahib and Akal Takht”. He described them as martyrs of Khalistan struggle.

Describing the assassination of General Vaidya as an act of bravery, Dal Khalsa head H S Dhami praised Sukha and Jinda for the exemplary courage shown during the trail of the case. “Instead of appealing for mercy they went to the gallows with smiling faces,” he said.

Another function to mark the occasion was also held at Gadli, a native village of Bhai Jinda, where speakers paid homage to both.

Previous: SIKHS Win Third Turban Case at the UN against France
Next: Attack on Gujarat Sikhs: BJP MLA in the dock