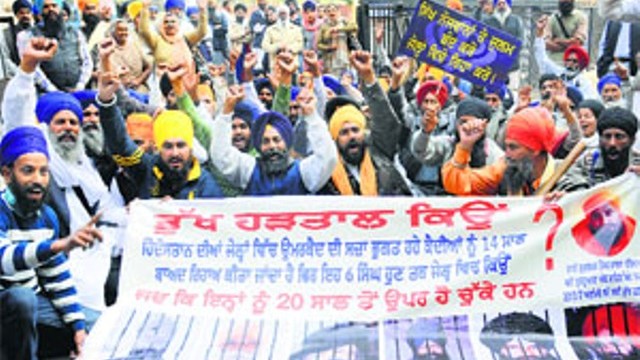 Sikhs rally for release of detainees

Amritsar, Punjab: Radical Sikh outfits today took out a protest march in support of Gurbaksh Singh and sought the immediate release of six Sikh detainees whose cases have been highlighted by him.

Activists of Dal Khalsa, SAD (Panch Pardani), Sikh Youth of Punjab and other like-minded groups participated in the march, following which they submitted a memorandum to Deputy Commissioner Ravi Bhagat.

They have urged the state government to initiate efforts for the release of the detainees whose details were also enclosed by them along with the memorandum.

Supporting the cause of Gurbakash Singh, who is on fast unto death since November 14, the representatives of these groups urged the Chief Minister to take up the issue with his counterparts in Karnataka, Gujarat, Uttar Pradesh and Chandigarh.

Three of these detainees — Gurmeet Singh, Lakhwinder Singh and Shamsher Singh — are lodged in Burail Jail since 1995. The Sikh leaders contended that these three detainees had already served a jail term of 18 years and had no criminal background.

The other three Sikh detainees are Laal Singh, Waryam Singh and Gurdeep Singh Khehra, all of whom have spent over 20 years in jail.

Speaking to mediapersons, Dal Khalsa’s office secretary Sarabjit Singh Ghuman said, “The Badals have been paying lip service on the matter, which is unfortunate… The government should act fast and release the detainees as it is a violation of prisoner rights that they are being kept detained despite completion of their legal prison term,” reads the memorandum.

Mohali: Supporters of various Sikh organisations marched from Gurdwara Amb Sahib here to the office of the Deputy Commissioner where they staged a protest in support of the demand for the freeing of Sikhs languishing in various jails.

They submitted a demands memorandum at the DC’s office, which was addressed to the Union Home Minister and the Punjab Chief Minister. The fast by radical leader Gurbaksh Singh Khalsa at Gurdwara Amb Sahib entered its 34th day on Tuesday. It had begun on November 14.

Harpal Singh Cheema, SAD (Panch Pardhani) acting president, alleged there was discrimination in the justice system. He said in order to garner support for the stir, an email ID, ambsahibmorcha@gmail.com, had been created.

A similar protest was held in Nawanshahr and several other parts of the state.

Jammu: The Jammu and Kashmir Sikh Council has demanded immediate release of the Sikh youth lodged in jail across the country who were arrested during the militancy years in Punjab.

Council state president Harmohinder Singh said, “We appeal the President to grant clemency to all youths who were languishing in jails despite completion of their jail term.”

Previous: US court asks Sonia Gandhi to respond by Jan 2
Next: City lads take to music to promote Sikhism