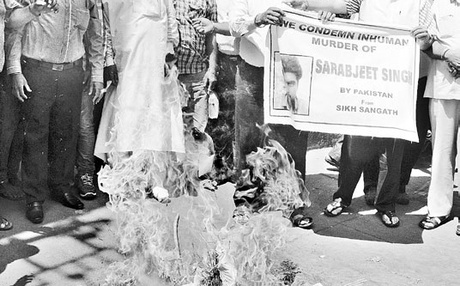 Hyderabad, India: Sikhs have risen in protest over the brutal and inhuman killing of an Indian citizen, Sarabjit Singh, in a Pakistani jail and also against former Congress leader Sajjan Kumar who was acquitted by the Delhi High Court in a case of Sikh Genocide. Holding banners and placards, hundreds of Sikhs gathered at Gurudwara Guru Singh Sabha, Ashok Bazar, Afzalgunj here on Friday and shouted anti-Pakistan slogans in protest over the brutal killing of Sarabjit Singh in a Pakistan jail. They torched the Pakistani government in effigy.

They also burnt the Indian government in effigy for its failure to initiate effective diplomatic steps to check the harassment of Indian prisoners in Pakistani jails. “Indian prisoners are not safe in the jails of Pakistan,’’ Tuteja, a Sikh leader, said and demanded a probe by an international organisation into the murder of Sarabjit.

The protesters also demonstrated against the acquittal of senior Delhi Congress leader Sajjan Kumar by a court in the case of Sikh genocide that rocked Delhi in 1984 in the aftermath of the assassination of the then prime minister Indira Gandhi. They shouted slogans and held placards which read ‘Hang 1984 Culprits’ and ‘Give Us Justice’.

President of Gurudwara Guru Singh Sabha S.Kuldeep Singh Bagga demanded action against Sajjan Kumar, Jagdish Tytler and others who were accused of instigating a mob that led to the murder of three men in a Gurdwara in north Delhi on November 1, 1984. “Even after 30 years we are yet to get justice.

The government should feel ashamed. We will never forget and forgive who allowed the culprits get scot-free. We want justice,” Bagga said. “Injustice has been done to us. The judgment has shown that Sikhs are second-class citizens in the country,” he said. “Over 4,000 Sikhs were killed on the roads of Delhi. They were brutally murdered and their houses burnt down,” Bagga said, adding that the judgment shocked the entire Sikh community. “We will fight back. We want justice. We don’t have any faith in the Congress government,” said Inderjeet Singh, another Sikh leader.