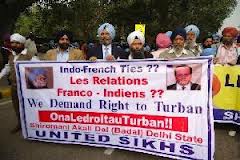 Sikhs protest outside French embassy in Delhi over turban ban

“If there was any doubt about the legality of France’s (turban ban) action, the eminent jurists of the UN Human Rights Committee (UNHRC) recently pronounced that France had violated the human rights of both Bikramjit Singh and Ranjit Singh by denying them their religious right to wear a turban….The global Sikh community says that France is able to reverse the turban ban for a photo ID because France has since adopted biometric ID documents, in compliance with EU regulations, which rely on facial features and fingerprints and do not require a bare head for the photo on ID documents,” Mejindarpal Kaur, UK based legal director of United Sikhs stated in the memorandum, that was submitted by a delegation led by protesters.

“Our argument against the turban ban in schools is that when a Sikh schoolchild removes his turban, his joora(top knot), which denotes that he is a Sikh, is visible. Hence, the French law that purports to ban the ostensible display of religious signs in schools should not apply to the Sikhs because it does not serve its purpose as a Sikh’s religious sign (unshorn hair tied as a joora) will be ostensibly visible when the turban is removed,” the memorandum stated.

Previous: Sikhs stage protest in Delhi over French turban ban
Next: Students at Khalsa Community School have grounding in morality