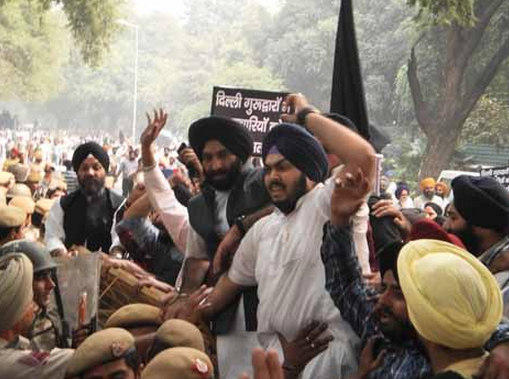 Delhi, India: On the second day of protests, Sikh groups shouted slogans Thursday outside Congress president Sonia Gandhi’s residence and the Congress office over the acquittal of Congress leader Sajjan Kumar in a 1984 Sikh Genocide case.

As many as 115 protesters were detained and later let off.

“Over a thousand protesters marched towards Sonia Gandhi’s residence, breaking two barricades. But they were blocked by the policemen. Similar scenes were witnessed at 24 Akbar Road (the Congress office),” a senior police officer told IANS.

A traffic police officer told IANS that several roads in central Delhi had been blocked to prevent angry protesters from reaching the Congress office and the residence of Sonia Gandhi. Among the roads closed to traffic and pedestrians were Akbar Road, Motilal Nehru Road, Krishna Menon Marg, Mansingh Road, Maulana Azad Road and Janpath.

Police barricades, however, failed to deter protesters who stood as close as they could to the places they wished to reach, shouting slogans.

“The protest went on for about an hour. As many as 115 protesters were detained outside the Congress office. They were taken in police buses to the Tughlaq Road police station,” Deputy Commissioner of Police S.B.S. Tyagi said.

The two buses in which the protesters were taken were damaged during the protest.

The necessary action would be taken against the protesters, as they have violated the Section 144 (of the Criminal Procedure Code, prohibiting the assembly of more than five people) imposed in the area, the police officer said.

After the protest, the crowd also organised a “langar” (community meal) outside the Congress office.

On Wednesday, protesters had blocked busy roads in the national capital. Metro services were also disrupted by the protests for a few hours.

The Sikh groups are angry at the acquittal of Sajjan Kumar by a city court Tuesday in a case related to the killing of five people in the Delhi Cantonment area during violence against Sikhs following the assassination of then prime minister Indira Gandhi Oct 31, 1984.

The court convicted five others in the case.