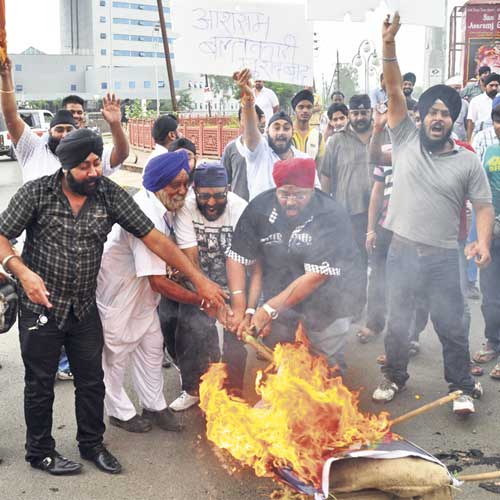 They demand apology from religious guru.

After facing charges of sexual assault against a minor girl at Jodhpur based ashram, the controversial religious mentor reportedly had said that he was ready to go to Tihar jail, as ‘Gurunanak Devji also went to jail twice.’

Various organisations representing Sikh community have strongly reacted to these remarks and Sunday’s protest was part of the reaction.

The enraged Sikh protesters beat up Asaram’s picture with shoes and also burnt his effigy to vent their anguish. The demonstrators also blackened Asaram’s picture displayed at the square, while demanding apologies from the self-proclaimed godman.

Gurusingh Sabha already has alleged that a person who is facing sexual assault charges is equating himself to great figure like Gurunanak Dev.

One of the protesters, Ranvir Bagga, told dna that the Sikh community is demanding unconditional apology from Asaram Bapu for his remarks.

The community has demanded from the mayor Krishna Murari Moghe that name of the Asaram Bapu square should be changed and should re-christened behind any martyr, Bagga said adding that the community would continue to protest against the religious guru unless he tenders an unconditional apology for his remarks.