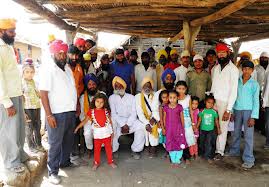 Comments Off on Sikhs in south, northeast lack access to education 547 Views

Patiala, Punjab: Punjabi University’s survey on Socio- economic conditions of the Dakhani and Sikh minorities in the Southern and North-Eastern states of the country has shown that the Sikhs are living under pitiable conditions.

Professor of sociology and social anthropology department Birinder Pal Singh Singh, who supervised the survey, has said that Sikhs scattered in Andhra Pradesh, Maharashtra and Karnataka and the Axomiya Sikhs in Assam did not have it easy.

“The condition is worst in north-east capitals Guwahati and Shillong region. Most of them had no access to education and were living in slum areas. The literacy rate was marginally very low among the community,” he said.

The survey was conducted for the National Minority Commission (NMC) on 1,011 respondents from Dakhani, Sikligar and Banjara Sikhs, scattered over numerous districts in Andhra Pradesh, Maharashtra and Karnataka, Axomiya Sikhs in Assam and Mazhabi Sikhs of Meghalaya.

Singh added that though 25 per cent of respondents earn more than Rs 14,000 per month. Nearly 74% of them have roof over their head, but 13% neither have toilets nor bathrooms. Nineteen per cent do without kitchen.

Interestingly, the survey report adds that the Dakhani and Axomiya Sikhs in Assam, believe themselves to be the progeny of Sikh soldiers, sent by Maharaja Ranjit Singh to support the Nizam of Hyderabad in 1832 and the Ahom king in 1820. The Sikh soldiers married local women adding a new racial feature to the Punjabi Sikhs and their local creeds.

Singh has submitted a 200page report to the NMC and has suggested six policy suggestions for improving the social and economic state of the community.

“First and foremost is easy access to education and vocational training as it can help in improving the social state of the people,” he said.

Singh claimed that though the Punjabi language was not practiced by the community, but all Sikhs in the sample believed in the ten gurus and Guru Granth Sahib and visited a gurdwara.