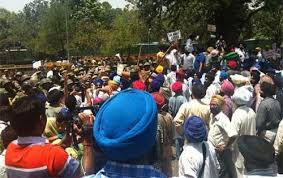 Singapore:  Sikhs in Malaysia are angry at members of the Democratic Action Party (DAP) for shaving their heads ahead of the country’s May 5 general elections in protest against what they called money politics.

The leaders of the multi-racial DAP had tonsured their heads at the Goddess of Mercy Pavilion at Kek Lok Si temple in Georgetown, the capital of the Malaysian state of Penang, Friday, the New Straits Times reported Saturday.

However, members of the Sikh community in that country have expressed outrage at the act, describing it as a political gimmick.

Among those who shaved their heads was Jagdeep Singh, the DAP candidate for the Datuk Keramat state seat.

Stating that DAP should not drag religion into politics, lawyer Baljit Singh said: “This is purely a political gimmick, a desperate move to undermine their political opponents.”

“Cutting your hair or going bald without any medical reason is unacceptable,” the gurdwara president was quoted as saying.

“It is worse coming from a public figure like him. There are many other ways of showing one’s displeasure,” he said, adding that it was Jagdeep Singh’s communal duty to keep in mind the sensitivity of Sikhs and their religion.

“For a Sikh to go bald in public is too much. It is an insult to the religion and the community,” another Sikh lawyer, Ranjit Singh Dhillon, said.