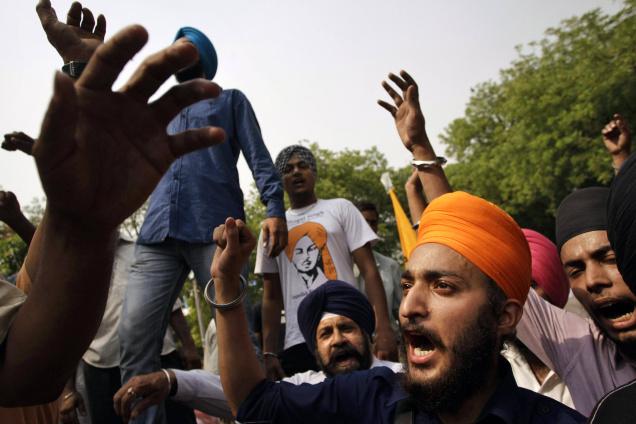 Comments Off on Sikhs continue to protest 440 Views

New Delhi: A week after Congress leader Sajjan Kumar was acquitted by a Delhi court in the 1984 Sikh genocide  case, the protests against the decision continue and on Monday a large number of Sikhs held a demonstration near Parliament House and blocked traffic for over an hour demanding justice for the victims. The agitating protesters held placards and shouted slogans against the ruling Congress Government and squatted at Vijay Chowk near Rashtrapati Bhavan.

Led by Delhi Sikh Gurdwara Management Committee (DSGMC) and Shiromani Akali Dal leaders, the protesters, including several women, sat on dharna for a couple of hours. They were later taken into custody by the police and escorted to a nearby police station. Last week, the group had disrupted Delhi Metro operations by jumping on the tracks at Subash Nagar metro station in protest and had marched to the residences of Prime Minister Manmohan Singh and Congress chief Sonia Gandhi demanding justice for the riots victims. Kumar.

National Democratic Alliance convener Sharad Yadav also reached Rajpath to express solidarity with the protesters. He said it was unfortunate and a failure of the Central Government that even after 29 years of the carnage, Sikhs have to come out on the streets and protest to seek justice in cases pertaining to the riots.

As a precaution on Monday, the police blocked the stretch of Rajpath from South Block to Rashtrapati Bhavan as also a portion of Raisina Road and Vijay Chowk. Traffic was also diverted causing inconvenience to the commuters.

A statement issued by the DSGMC said the protesters will go to any length to get justice. The DSGMC president Manjit Singh G.K. said that the protests against Mr. Kumar will continue. The Committee general secretary Manjinder Singh Sirsa and other representatives also participated in Monday’s protests.