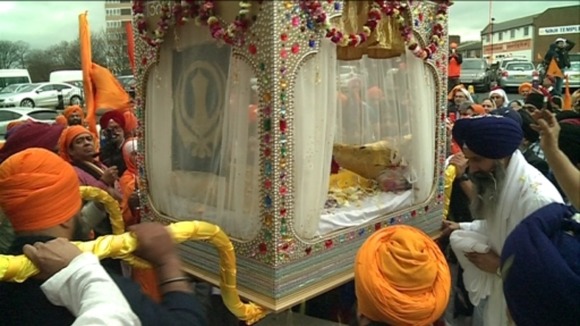 Newcastle,UK: It was a historic day for Newcastle’s Sikh community when they celebrated the opening of a  new temple

It was a historic day for Newcastle’s Sikh community when they celebrated the opening of a new temple.

Crowned by a 12ft gilded dome, the £2.7m Gurdwara is the first in the North East to be purpose-built and, it is hoped, it will become a “spiritual hub”.

Inspired by the Golden Temple in Amritsar in India, one of the most important shrines in the Sikh religion, the new temple overlooks Newcastle city centre and St James’s Park.

Hundreds of people of all faiths joined in with the opening ceremony yesterday, planned to coincide with the Vaisakhi celebrations, one of the most important dates in the Sikh calendar.

Following a procession from the old Gurdwara to the new location in Cottenham Street, there was a display from a martial arts group and a flower ceremony, before formal speeches from faith leaders, MPs and leader of Newcastle Council Nick Forbes.

Temple committee member Dr Pummi Mattu said: “This is a historic day. In the 1960s the first Gurdwara in Newcastle was just inside someone’s home. Now, for the first time in the North East we have one that has been purpose-built for the community and we hope it will become a hub of spirituality and be used by people of all faiths.

“The atmosphere has been buzzing as people were able to see inside this amazing building for the first time.”

The project has been funded entirely by members of the Sikh community and the building will be used for worship, education and community activities held within the prayer halls, classrooms and eating area.

Part of the car park is built on top of a burial ground created for Tyneside victims who died from the plague during the 1850s.

The burial ground belonged to St Paul’s Congregational Church, which was built in 1841 and demolished in 1967.

The graveyard had not been used for more than 150 years, so Newcastle City Council granted planning permission in 2010.

The existing Sikh temple is directly opposite the new Gurdwara and has served the Tyneside Sikh community for more than 35 years.