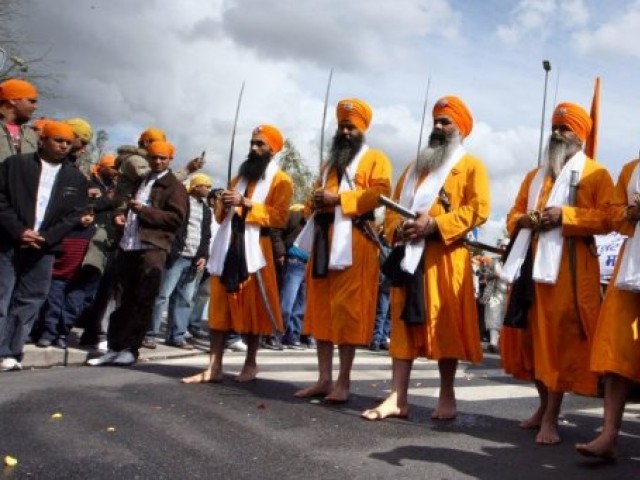 Sikhs caught in crossfire of France’s battle to stay secular

Paris:  France’s Sikh community is ramping up a campaign for the turban to be allowed in state-funded schools amid moves to reinforce a 2004 law banning pupils from wearing religious symbols.

The contentious issue pits the cherished French principle of secularity in public life and institutions against the essence of the Sikh religion, which requires followers to keep long hair as a mark of their faith and piety and a turban to cover the tresses, worn as a bun on the top of the head.

France’s Education Minister Vincent Peillon has unveiled a new charter on secularity which must be displayed in government-funded schools explaining in child-friendly language why the Jewish skullcap and the Star of David, the Sikh turban, crucifixes and the Islamic veil are taboo.

But the 30,000-strong Sikh community in France argues that they are the victims of ignorance.

They see the recent official emphasis on secularism as being primarily the result of opposition to the Islamic veil and broader tensions with the largest Muslim community in Europe, and say they have been caught in the crossfire.

“We are currently in talks with (Interior Minister) Manuel Valls to explain our unique situation and to be exempted from this law,” said Kashmir Singh, a member of the management committee of the largest gurdwara in France, located in the Paris suburb of Bobigny.

“We have also met Manmohan Singh asking him to put pressure on France for justice to be done,” he said, referring to the Indian prime minister who is also Sikh.

Ranjit Singh was one of the first Sikh boys to be expelled from his lycee, or high school, after the 2004 law.

That left deep scars but he has moved on since and is currently pursuing a doctorate at the prestigious Sorbonne university in Paris.

Previous: PAU experts step up efforts to save Dukhbhanjani Beri
Next: Takht chief wants PM to take up issue with Obama