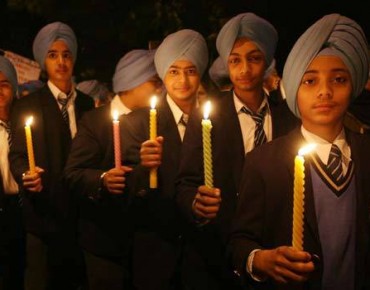 Baramulla, Kashmir, India:10th June 2012: Turbaned Sikh students have been attending classes for the last fortnight following their earlier exclusion for wearing their turban at the St Joseph’s Higher Secondary School in Baramulla, 50 km from the State Capital, Srinagar. From 16th May, the 107year old school, which has 300 Sikh students, had excluded turbaned Sikh students from classes saying that the turban is against the school’s uniform code. Following a letter writing campaign by UNITED SIKHS to the school and State and national authorities, the school principal called a meeting with parents of the affected students and the Sikh community representatives, on 25th May, when he announced that the students may return to school wearing their turbans.

On 21st May, on behalf of some parents and the Baramulla Gurdwara Parbandhak Committee, UNITED SIKHS had written to the school principal, Fr Sebastian Nagathunkal and to Rt. Rev. Peter Celestine, the Bishop of the Diocese of Jammu-Srinagar that runs the school, asking them to uphold the Sikh students’ religious right to wear their turban.

“We also wrote to the Education Minister of Jammu and Kashmir asking him to intervene. These letters were copied to the Cardinal of the Indian Catholic Church of India, the National Human Right Commission and the National Commission for Minorities,” said Mejindarpal Kaur, UNITED SIKHS International Legal Director.

“UNITED SIKHS is very grateful to all parties who helped resolve this issue expeditiously. We are very pleased that this incident has opened the way for students to wear a turban at the St Joseph’s school in Baramulla, where historically the wearing of the Sikh turban was a rare occurence,” she added.

“With the grace of god, about 25 students wore the turban to school (on 28th May 2013). This is a positive sign,” said Dr Tara Singh, member of the Baramulla Gurdwara Parbandhak Committee, who met the school principal with some parents, after the issue was raised by UNITED SIKHS.

Previous: US Sikhs applaud the lifting of ban on Kirpan at Gurdwara of Rochester, New York
Next: UNITED SIKHS: Filling Gaps in Community Oral Health Needs