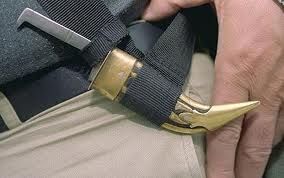 Sikh student in US not allowed on bus for wearing kirpan

New York, USA: A Sikh student in the US was not allowed to board a bus because he was wearing a knife called kirpan, a symbol of his faith, media reported.

Harsimran Singh, a student of University of California in Davis, said he was not allowed to board an Amtrak bus Saturday because the driver was against Singh wearing the ceremonial knife.

The student said he has travelled for the last two years with the knife in full view and had not had any issues till the incident on Saturday, CBS News reported Wednesday.

“They don’t say anything. They always wish me safe travel, and they continue on with their business… they didn’t see me as a potential threat,” Singh said.

According to the report, bus driver Al Smithee got concerned at the presence of a weapon on the bus.

“I’m doing 70 miles an hour down the freeway, and he slits my throat, and I crash and wreck, and kill five other people or oncoming traffic. You don’t know,” he was quoted as saying.

Smithee then called the police who then told Singh that he could board the bus if he stowed the kirpan.

But Singh did not agree and decided against the trip he had planned to visit his family.