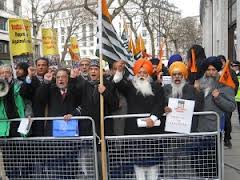 Sikh NGO up against Australian magazine

Comments Off on Sikh NGO up against Australian magazine 62 Views

Amritsar,Punjab: Sikh NGO, United Sikhs (US) has announced to take action against the publication of a photo of Nihang Sikh in an Australian Magazine.

National Director, US , Harjit Singh informed TOI on Tuesday that on January 26th, a newsagent in Brisbane, Queensland, Manmeet Singh brought to the attention of US about the first-page article, “Turban Legend’ in a pornographic magazine.

The magazine showed a photograph of a Nihang Sikh with hands clasped in prayer (the unclear background of the Golden temple, the sanctum sanctorum of Sikhs) said he.

The article about Nihang Sikhs was surrounded by photographs, including at the foot of the article, of nude females. The entire magazine displayed raunchy nudity and was replete with foul, irreverent and inappropriate language and the tone ridicules the dumalla (turban) and Nihang Sikhs. He informed that they were of the view that the publishers had breached both Federal and State criminal, civil and human rights laws.

“We are lodging a complaint with the Australian Human Rights Commission” said he.

He further said that the US’s Legal and Advocacy’s Rapid Response Team was liaising directly with Manmeet who had not only withdrawn the magazine from his agency’s shelves but would also urge other retailers to do likewise.

He said they had appealed to Australian MPs to stand up and publicly condemn irresponsible and morally offensive publications and to call on the publishers to exercise common decency, restraint and responsibility towards fellow ethnic and culturally diverse Australians. They have also urged all Sikhs living in Australia to call up the local Federal and State MP and lodge a protest and insist that the MP takes the action.