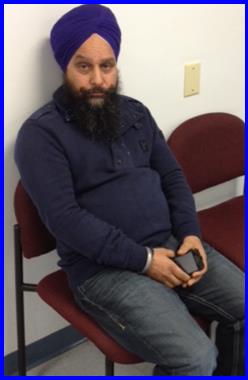 Jackson, Mississippi: UNITED SIKHS and The American Civil Liberties Union (ACLU) of Mississippi, have filed a complaint with the Mississippi Department of Transportation (MDOT) today calling on state officials to investigate the harassment of Mr.Jagjeet Singh, a Sikh commercial truck driver pulled over earlier this year for a flat tire.

Officers called Mr. Jagjeet Singh (Pictured) a “terrorist” and had him arrested for declining to remove his kirpan, a small- sacred sword and an article of faith which Singh lawfully wears in accordance to being an amritdhari (initiated) Sikh. When he returned to Mississippi for his court date in Pike County, Judge Aubrey Rimes ordered him out of the courtroom because he did not like his turban – calling it “that rag” — and threatened to punish him unless he removed it.

The letter sent to MDOT officials demands that they provide public documents relating to Singh’s detainment and arrest and urges them to implement an ongoing training program to educate officers about their responsibility to treat every person with dignity and to remain respectful of religious diversity.

Earlier, UNITED SIKHS successfully advocated for policy amendments after Mr. Jagjeet Singh was asked to remove his turban in Judge Rimes’s courtroom. The Pike County Personnel Policies and Procedures Manual now includes a harassment and non-discrimination policy. A Civil Rights Complaint was filed by UNITED SIKHS with the Department of Justice (DOJ) after which this policy was voted into place by Pike County Board of Supervisors. It is applicable to all Pike County employees. Now the ACLU and UNITED SIKHS are taking further measures to fully address this sad incident.

“Sikhism is a growing religion across the country,” said Manmeet Singh, staff attorney for United Sikhs. “Sikhs are known for their devotion to God and their communities. They deserve the same protections as all other people of faith. No person should be harassed and discriminated against by law-enforcement and judicial officers merely because he practices a minority religion.”
UNITED SIKHS would like to extend its gratitude to American Civil Liberties Union (ACLU) President Ms. Susan Herman, ACLU Senior Staff Attorney Ms. Heather Weaver, and Legal Director of ACLU Mississippi Ms.Bear Atwood who have worked diligently with us and taken strong measures to address this incident.

We encourage you to practice your faith fearlessly. We humbly request you to support us so we can continue to fight for everyone’s right to identity.