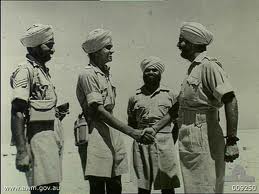 Jalandhar, Punjab:  Sixth battalion of the Sikh Light Infantry will be celebrating golden jubilee of its Raising Day on October 1. To commemorate the sacrifices made by the Officers, JCOs and other personnel of the battalion while serving nation during the last 50 years, the battalion has undertaken a “Reach out programme” to attend to the concerns of all its ex-servicemen.

The arduous task of contacting each one of the 2,760 ex-servicemen and the war widows, commenced with multiple teams led by Junior Commissioned Officers reaching out to the retired personnel and their families at various villages in Punjab, since March this year. After collating and listening to the problems being faced by them, efforts were made to settle the issues by approaching the authorities concerned.

The “Reach out programme” will culminate in an “Ex-servicemen contact meet” to be held by the battalion at Ferozepur, Jalandhar and Pathankot on July 20, 22 and 24, respectively. During the meet, all ex-servicemen will also be educated on various benefits and assistance available through the state and central governments. Pamphlets in Punjabi published by the Sikh Light Infantry Regimental Centre on “Post retirement and death benefits” have also been distributed to increase awareness among ex-servicemen.

Notably, the battalion was raised by Lt Col (Brig retd) PK Nandgopal, at Meerut, on October 1, 1963. Immediately after its raising, the unit played a major role in thwarting the Pakistani juggernaut in the Chhamb sector in 1965. Having suffered heavy causalities while denting the Pakistani offensive, the battalion re-grouped immediately and was tasked with the recapture of Kalidhar feature. The daring assault on the feature and the successful completion of the task, against all odds, earned the battalion the battle honour of ‘Kalidhar’.

The Sikh LI, after having earned glory in 1965 and 1971 wars, contributed immensely in combating insurgency in Jammu and Kashmir. The unit was awarded with the prestigious J&K Governors’ Silver Salver and unit citations by the GOC-in-C Northern Command and Chief of Army Staff in 1997 and 1998, respectively. Considering the excellent operational record, the battalion was nominated to serve under the UN flag in United Nations Mission in Democratic Republic of Congo. Due to its commendable efforts, the unit was awarded with unit citations by the force commander.

Tagged with: Chief of Army Staff