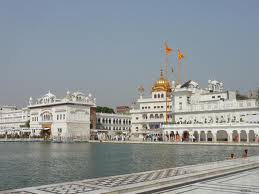 Sikh intellectuals back Sidhu on his religious utterings

Amritsar, Punjab:  Sikh intellectuals have appealed to Jathedar of Akal Takht Giani Gurbachan Singh to examine the whole context in which BJP MP from Amritsar Navjot Singh Sidhu had used the religious song Naam Khumari Nanaka Charri Rahe Din Raat in a satirical form before taking any action against him.

Sikh intellectual and a senior professor of Guru Nanak Dev University Professor Balwant Singh said that though the verse was not a part of Gurbani but Jathedar should examine the whole context in which it was used – may be in satirical form. Going through the reported verse uttered by Sidhu he said “It appears as if he has only praised the name of Nanak”. Sidhu’s uttering of Sikh religious song in humorous way had earned the wrath of Akal Takht jathedar.

Gurbachan Singh said that Akal Takht secretariat had not received any complaint against Sidhu but the Sikh clergy would definitely contemplate so as to dispel the confusions among Panth with respect to mocking of Sikh religious songs. Another Sikh scholar Baljinder Singh said “One has to be cautious while using Sikh religious names but it should be examined by Sikh clergy before reaching at any decision”. Despite several attempts Sidhu who is reportedly in Mumbai, couldn’t be contacted for comments.

Gurbachan Singh also took notice of violation of rehat maryada (Sikh code of conduct) by Sidhu. He said anyone not adhering to Guru’s teachings or way of life was not a Sikh but an apostate. Talking about reports of ban on Sikh symbols in some European countries Gurbachan Singh said he had directed Shiromani Gurdwara Parbandhak Committee (SGPC) to take up the issue with Center government through Punjab government. “This is a sensitive issue and all the Sikh leaders , irrespective of their political affiliations, should gather under the aegis of Akal Takht to restore their religious pride” said he. Jathedar also took notice of Delhi University’s reported ban on Punjabi language in its four year graduation policy.